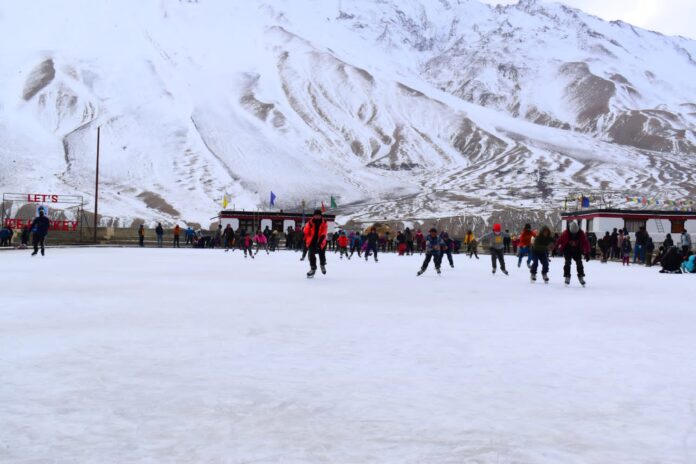 Shimla, Dec 17
The tribal Kaza, town headquarter of Lahaul Spiti district is currently bustling with creativity in freezing temperatures as 395 children mostly early tender age are committedly learning Ice hockey skills in a training being organised here.
Sakaljung Dorje , Incharge of Youth and Sports Services Department Kaza informed that a ice camp was organised to hone the skills of children as the same would last till Dec 24.
“This time record 395 children have been registered in the camp. Adding this number is higher compared to last year. The camp is divided into three categories including Beginner, Basic, and Advanced categories. ” he informed.
“The minimum temperature was ranging at minus 17 to minus 20 degrees but children are busy skating with there blades on the 15 cm thick layer of ice. “
Children from different sge groups are learning skating skills and basics of ice hockey from National coach Amit Belbal during this camp.
The large number of registration in Spiti is indicating that the children are keen to learn ice hockey which would help to give new dimension to the sport in the State.
The natural Ice-skating Rink was developed last year is becoming ‘Mekka’ for adventure sports enthusiasts. The cold Spiti valley can host uninterrupted  Ice Skating activities for three to four months and experts beleive that in future this facility could prepare many national and international players.
Kaza is also hosting National Women’s Ice Hockey camp with effect from 25th December,  soon after this camp would be over. National Women’s Ice Hockey Championship 2022 is also scheduled to be held here on 16 January.
ADM Kaza Mohan Dutt said that from 16 January 2022 to 20 January 2022, five to seven teams are expected to take part in the national competition. Each team would have 22 players.  Along with this there will also be ten officials.  There will be two to three matches daily in the competition.
Players from Hyderabad, Leh, Chandigarh, Delhi Mumbai Himachal etc. will participate in the camp.