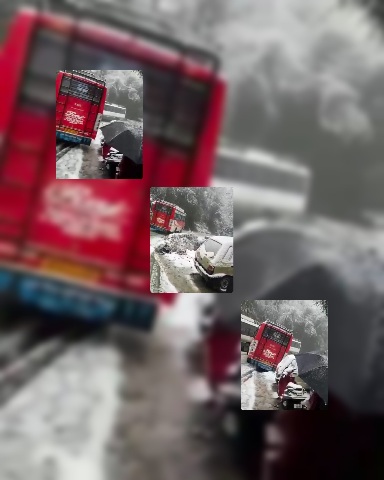 Shimla, Feb 4
Heavy to very heavy snowfall in many parts of Himachal Pradesh forced the state and district administration to issue travel Advisory to commuters, Tourist and local people to avoid traveling on the slippery roads as it could cause mishap and further rescue is not easy.
A advisory issued by the Superintendent of Police Shimla Monika Bhutunguru said that it is constantly snowing in Shimla city and upper areas of the district.
SP urged general public to avoid unnecessary travel. In case of emergency travel by safer alternate routes as most of the roads in Shimla town are closed due to slippery conditions .
Roads at Kufri, Narkanda , Khidki & Kharapathar are also closed due to significant snow accumulation, she added.  She also said that in case of
any emergency police could be contacted for assistance on phone number 01772812344 and 112.
An incident of Road accident occured at Chori Nala near Bharanu,  under Nerwa tehsil of Shimla district where one person died on the spot at 0300hrs on Friday. Deceased identified as  Mandeep Pamta S/o Mohan Lal Pamta Village Gocha P.O Bharanu. Immediate relief of Rs 10,000 were issued to victim’s family.
Normal life is completely out of gear as 677 link road four National Highway and one state highway are snowbound. 178 roads are snowbound in Lahaul-Spiti, 169 in Shimla, 167 in Chamba, 60 in Mandi, 56 in Kullu, 28 in Kinnuar, 15 in Solan and six roads are affected in Sirmaur district respectively.
Power supply affected in 961 distribution Transformer Regions including 371DTR in Chamba, 254 in Shimla, 188 in Mandi, 140 in Kullu and four each DTR in Kinnuar and Solan.
Water supply disrupted by heavy snowfall in 98 places. Water supply scheme including 71 WSS in Chamba and 27 in Lahaul-Spiti district.
Road transport are suspended in one thousand routes, no flights are being operated in any airport in the state baring rail network road and telecommunication services are badly affected.
An Avalanche hit Manali- Sarchu Road at 105.2 km from Mulling and 2 km towards Tandi I. Lahaul-Spiti district of Himachal. Snowcutters have been deployed to clear the Avalanches and snow from both the sides.
District administration Lahaul-Spiti also sounded advisory that all NHs & SHs and link Roads have become blocked and slippery in many places due to snowfall.
Warning of high possibility of avalanche and landslide have been issued in wake of very heavy snowfall in the high reaches which are snowing continuously.
Manali-ATR-Keylong NH-3 is close since two-day as approximately three feet snow mounted on the road at Sauth Portal of Atal Tunnel.
Administration announced that only in Emergency cases, four by four (with chains) vehicles only after permission would be allowed on routes within valley where conditions allow.
Number of places are cut off from the road and Transport and state diaster Management authority issuing advisory and warning of inhospitable Weather and Avalanches threat in many places.
How much snow where
Tourist resort Dalhousie recorded three feet snow, Chamba,  Salooni and Tissa 1 ft each.
Bara Bangal in Kangra recorded 3.5 ft, Rajgundha three ft, Bara Gaon two ft, Bir -Billing Triund one ft.
In Kullu, Rohtang Top 5.6 ft. Atal Tunnel & Gulaba 3.6 ft each, Solang 2.8 ft, Palchan & Jalori Jot 2.6 ft.
Prashar Lake in Mandi district had 1.6 ft snow, Shikari Mata 1.6 ft , Magru Gala, Kamru Nag and Shatta Dhar one ft snow.
In Shimla district , Khirki 1.50ft, Chopal, Dodra Kwar, Khara Pathar and Narkanda one ft and in Sirmaur, Haripurdhar 1.5 ft Snowfall.