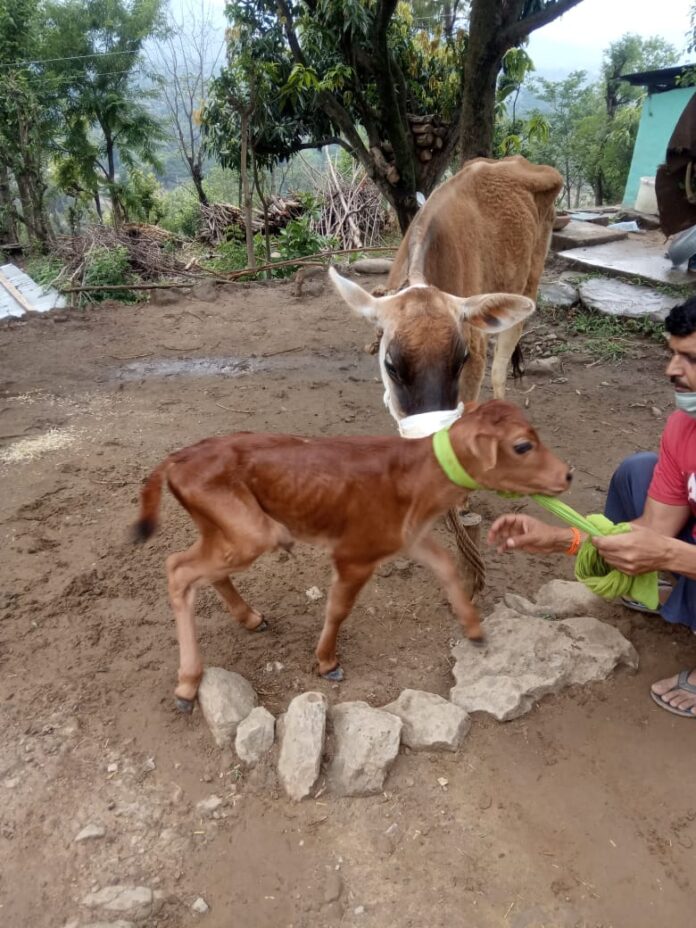 These days when the heart breaking incidence with the pregnant elephant in Kerala is being condemned countrywide a major relief has been reported from district Bilaspur of Himachal Pradesh. On the evening of May 25, a cow, had eaten a bomb mixed in feed. Reportedly the bomb was planted for hunting wild boars in a Jhaduta tehsil village. Not only the cow has survived the incidence but also the injured cow has given birth to a healthy calf. According to the information received, the cow was pregnant at the time of the accident. While the heart throbbing news of a pregnant elephant losing sibling because of similar sort of incidence hs been a point of concern for citizens this news has brought some relief. According to the information received, the doctors of Bilaspur Animal Husbandry Department are keeping a close watch on the condition of the cow. According to the vets, the jaw of the cow has been damaged by the explosive upto 4 inches and it will not be able to become normal again and deformity to cow will remian. But despite this, once her wounds heal, she will be able to eat a pinni-like diet by herself.
On the other hand, the police of Jhanduta police station of Bilaspur have arrested Nandlal, a resident of the neighborhood, on the complaint of cow owner Gurudayal Singh. The accused will be produced in the CJM court of Bilaspur tomorrow. It is being told that the accused Nandlal has dismissed the allegations outright. He says that he was not there on the day of the incident. On Saturday, the police team, including the local Deputy Superintendent of Police, had re-examined the sight. According to the information received, this is the second case of a cow swallowing explosives during lockdown. Earlier, a similar explosive was also swallowed by a cow in the Sulani village of Jhanduta, but the cow did not suffered fatal injuries. Sources inform that besides poachers such illegal steps are also being taken by people to protect their crop from wild animals in the area, which is becoming a problem.
Deputy Director, Animal Husbandry department Bilaspur stated that a Jersey Crossbred Cow, approximately 6 years old belonging to Gurdial Singh son of Baldev Singh, resident of V&PO Dahad Tehsil Jhanduta, District Bilaspur sustained fatal injuries on 25/05/2020 due to accidental ingestion of explosives. The explosive was kept as bait for wild animals by the hunter’s. The animal was treated by a team of Veterinary Doctors on 26/05/2020 and was provided treatment as per requirement. The cow was pregnant at the time of incident and was induced for parturition and delivered a live male calf. The cow is under treatment but prognosis is grave as both the upper and lower jaw bones have blown away and ingestion is adversely affected.
Pritam Sharma of Jhanjhuta police stated that on the complaint of a cow-foster of Dhadh village of Jhanduta, a case was registered against his neighbor under sections 286, 429 and section 11 of the Prevention of Animal Cruelty Act of the IPC. He was arrested on Saturday, he will be produced in court tomorrow.