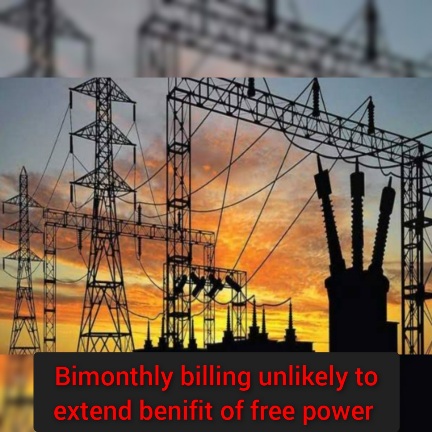 Shimla, Jan 30
Bimonthly billing cycle by the State electricity board in rural areas is unlikely to extend the benifit of free power to the people of state.
Many citizens living in rural areas are not happy with the formula devised by State electricity board to issue bills on bimonthly basis in haphazard fashion due to shortage of staff in the board and outsourcing of billing leading uneveness.
“No benifit of free power is likely to be extended if a consumers is using more than 120 units in two months,” stated citizens. Taking a instance where consumer may use 55  units in one month and 67 units in the second. Then the total usage would be calculated at 122 units which will shift the consumer out of the free electricity slab.  Instead of free power of one month and Rs 67 for the second month, customer will have to pay for total 122 units in the billing cycle.
When contacted with this query, no reply was received through officials of the HP electricity board.
However, this formula of bill would certainly defy the announcement by Chief minister Jai Ram Thakur on Statehood day function on Jan 25th at Solan. He had said that as many as three to four lakh consumers who are using 60 or less than 60 units would be given free power from March, 2022.
He had also said that seven lakh consumers would also be benifit from reducing per unit charge of power upto 125 units from Rs 155 to Rs one per unit. Similarly charges of electricity bill of Agriculture consumers would also be cut down to 30 paisa from 50 paisa with effect from April 2022.
Chief minister announced the relief to provide relief to consumer who are affected by Covid pandemic and it would incur additional burden of Rs 90cr on the state government.
State has around 28 lakh power consumers in the state who are being provided subsidised power tune to Rs 500 Cr per annum.
Against generation cost of Rs four to five per unit state consumers are being provided power at average Rs three to four per unit for domestic consumers.
Himachal Pradesh is a power surplus state in the country however during winter state buys power from National grid to meet the increasing demand.
State is considered number one for generation of highest hydropower in the country which is considered environment friendly and has negligible or almost zero Carbon emissions.