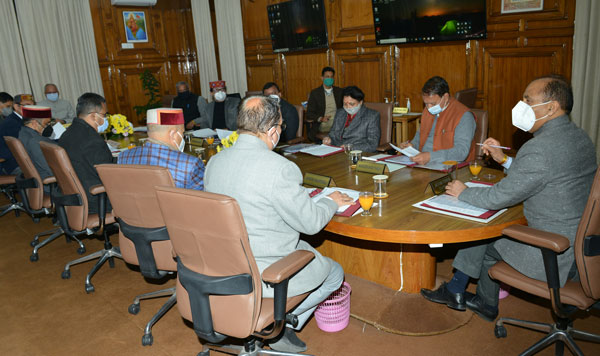 In view of the ongoing pandemic the Covid-19 SOPs and night curfew in the four districts in the State will continue till 5th of January, 2021. This was decided in a State Cabinet meeting held here today.

Also the cabinet gave its nod to grant ex post facto permission to operationalize ‘make shift hospitals’ at Shimla, Nalagarh, Tanda and Nerchowk in public interest at a cost of Rs. 1.37 crore, Rs. 2.36 crore, Rs. 3.44 crore and Rs. 6.11 crore respectively, out of which 50 percent funds have been provided to CSIR/CBRI Roorkee in advance.

The Cabinet also gave its consent to create Pain and Palliative Care Cell under Radiotherapy Department in Indira Gandhi Medical College, Shimla for providing better health facilities to the people.

Office of DIG (Intelligence and Security) shifted from Shimla to Dharamshala

It also gave its consent to shift office of Deputy Inspector General (Intelligence and Security) from Shimla to Dharamshala in the public interest.

The Cabinet gave its nod to the Himachal Pradesh Auro Sports Rules, 2020 with a view to promote auro sports activities in the State by adopting complete safety measures.

Jobs approved and other decisions

It also decided that condemned vehicles of various departments such as Public Works, Jal Shakti, MPP and Power departments etc. lying unutilized by transferred to Technical Education Department so that they could be used in various ITIs keeping in view their viabilities.

The Cabinet also decided to fill up 131 posts of different categories in Rural Development Department on out source basis for effective implementation of Rashtriya Grameen Swarojgar Abhiyan.

It decided to set up District Forensic Units at Bilaspur, Nurpur and Baddi alongwith creation and filling up of 12 posts of different categories. The Cabinet decided to create and fill up 25 posts of Junior Office Assistant (IT) in Agriculture Department through direct recruitment on contract basis. The Cabinet gave its nod to create three new patwar circles Kolar, Misharwala and Sainwala Mubarikpur and a new Sub tehsil Majra by bifurcating patwar circles Majra and Dhauklakuana in Tehsil Poanta Sahib in Sirmaur district.

The Cabinet gave its approval to fill up six posts of different categories in Town and Country Planning Department besides creation and filling up of one post of Junior Office Assistant (IT) in SADA, Pangi at Killar.

It decided to create and fill up one post of Manage Marketing in Milkfed on contract basis besides creation of two posts of Plant Engineers and one post of computer programmer in Milkfed.

It also decided to fill up three posts of Manager Production/ P &I and seven posts of Assistant Manager (QC/P&I) in Milkfed on contract basis.

It gave its consent to fill up three posts of Steno Typists in Agriculture Department through direct recruitment.

The Cabinet decided to fill up three posts of drivers in Ayurveda department on daily wage basis.

Presentations were made before the Cabinet on ‘Six months target till March 2021 and next one year’s target with effect from April, 2021 to March, 2022’ by Tourism and Horticulture Departments.

HC issue notice to state over abolition of lease system