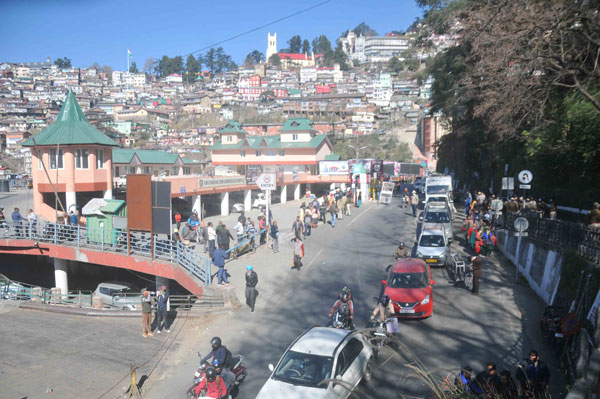 A car rally of Lamborghinis and BJP affiliated trade union BMS protest crippled the vehicular traffic in the capital own for many hours as long queues of vehicles were witnessed stranded on the two lane road from Old Barrier to Victory tunnel this afternoon.
The town simultaneously witnessed a Lamborghini car rally around 1230 hrs to 1300 hrs on Cart road in which 50 participants on cars ranging from Rs 3.15 Cr to Rs 6.15 Cr, were seen. District administration made special arrangement for movement of rally stopping the routine traffic coming to Shimla from Totu, Kalak Shimla and Airport roads to clear the passage. It took almost one and half hours for the commuters to cross old barrier to Shimla bus stand.
A organizer of the event said that 50 cars were flagged off from five star hotel at Gurugram’s Khidki Daula toll to Shimla. The car rally was given free passage by the police vis a vis to general commuters.
Sidewise, the Chakka Jamm by the BJP affiliated trade union BMS today on the same route to support the demands of Anganwadi and Salai teachers government employees, added to it.
A local resident Ramesh Kumar said that two events crippled down vehicular traffic in the town and some of the officers of administration had to rush to handle the traffic.
He said that a 400 km rally from Gurugram to Shimla in the hill was held on the weekend and on Monday when vehicular traffic remains congested due to check in time on Saturday and Check out time on Monday. It is not clear if the permission was taken by the organizer of the events for the rally and protest during the rush time.
In routine period too, number of bottle neck points often remained congested on the weekend in the town however such events should be allowed in less peak hours, S S Jogata the said state spokesperson of Aam Adami Party.
This tourist town witnessed a sudden increase in the footfall of tourists however the sudden
increase in traffic is caused air pollution which needs to be addressed. The construction activities along Kalka Shimla four lane road already has created a menace and number of vehicles entering the town is beyond saturated capacity of its parking and roads need to be curbed with effective management of traffic, added few citizens.
Not only the roads, today even the heritage Ridge considered the heart of town became hotspot of Covid infection to spread as haphazard permission to allow the police parade and organizing of events is also flouting the social distancing norms in the crowded place. Local residents were stopped to walk on the ridge as they were forced to walk on the pavement at Padam Dev Complex and in congested narrow passages owing to the week-long parade organized by the state police.
The world facing threat of another deadly variant of Corona Virus seemed to show no regard here, as the state administration itself is indulged in the creation of a crowd showing least regards to the wearing of masks or not.
Political rallies are also being held in the state without any purpose and people and political parties activists  are not wearing masks at all or some of them properly.
Covid has already taken lives of about 3500 people in the last two years, denting the state economy. The failure of crowds and choking traffic management are inviting another pandemic which could not be ruled out if the situation does not improve immediately.