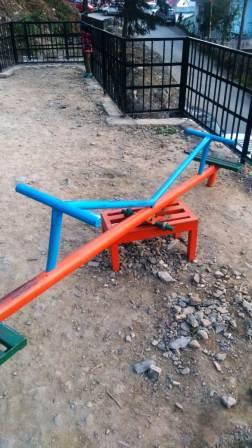 Non voting members of Shimla i.e Children are the least thought about subject for the city decision makers. Since minors cannot or rather do not come on roads raising slogans of protest none in city is interested to take note of their problems. Attributed to geography of Shimla where on one hand, due to lack space in the city these siblings have not been provided enough spaces to play. On the other hand what little has been created for them, is not well maintained. Residents of HIMUDA colony in phase 3 of New Shimla complained that the park created for children to play in their area is not maintained and is causing danger to them. The resident welfare association of the area has even given a written communication in the matter to Municipal commissioner of June 10 this year but to no respite yet.

In the complaint they informed the MC Commissioner that on May 12 a child got grievously hurt when the swing in the park broke while the kid was on it. “We have even submitted a video evidence of the same,” stated Manu Mahindra a resident of the area. He informed that the incidence was recorded in a CCTV camera installed at house near the park. He said that the children’s park has become useless and dangerous due to low quality work.

Detailing the low quality work in their complaint the association wrote that the chains used on swings are faulty in design (Too thin)(pic) and have the possibility to break anytime. Secondly the See-saw installed in the park is broken. Thirdly the round-about for children in lack of regular lubrication does not rotate and has got tilted to one side. The residents stated that the park is not cleaned properly and is full of stones. “Kids get badly hurt when they fall here,” they added. Fourthly the construction of the park is incomplete and large amount of debris is lying in it. They suggested that tiles should be installed in the park, so the playing surface could be made even for kids to play. “However after a month gone, no action has been initiated on the matter,” they rued.

Politicians/authorities usually seem to forget that after the loud inauguration ceremonies which they host to inform their voters about the achievements, such children parks also need maintenance. The plight of most children parks in the city is almost the same as this one. “Kids while playing definitely could manhandle/damage the equipment installed, but the wear and tear could be reduced through regular maintenance of these machines. It is the duty of the government/authorities to maintain it, so that no untowardly incidence takes place, but the same normally ignored,” rued Atul another resident of Shimla.

It is well assumed that as part of the social system it is elders who need to take care of the children. More than it, in a democracy chosen public representatives (Councilors in this case) is given this role to care about welfare of all stakeholders in the area. “But here in case of our ward no 30 the councilor couldn’t care less,” stated a resident of the area on condition anonymity. “What the association saw and complained about, she could have seen too, and initiated maintenance,” he added.” Provided she had interest in kids’ facilities,” he rued. Alas kids don’t vote and so are not at the focal point of priorities for decision makers, he summoned.