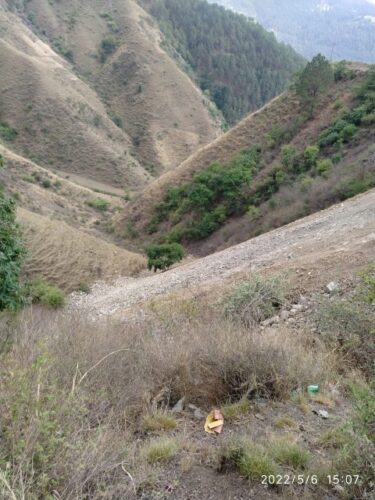 Shimla, May 12
Flash floods and landslide incidents during the rainy season increase exponentially in Himachal Pradesh. Various fact-finding reports have attributed the relentless, unscientific mining and dumping along the hill and valley side, responsible for it. These days, Shimla town is getting massive funding from International and National Institutions for many mega projects and skyscrapers coming up inside the city’s heart. However, these projects, while implemented, show the slightest regard for the laid norms. These works are being executed by governmental agencies through tendering to the private firms; however, compliance with environmental norms is not being ensured. A fresh example of such a project is Dhalli tunnel which is being made double lane these days. The project proponent is expected to dump the muck according to the MOU or contract agreement at the designated dumping site as an excavation of 11000 cubic metres of muck and boulders is anticipated during this project which is approx 900 trucks. The execution of the tunnel construction is being done by M/s Sai Construction. The dumping of construction muck is expected to be done at the offical dumping site, or stone crusher installed to recycle this material 15 km ahead. However, residents allege that negligence of dumping norms is being done in this case. According to them, the trucks filled with tunnel muck are being thrown down the valley at arbitrary locations.
The locals feeling the heat of future flash flood disasters downstream told us that officials of Public Works, MC and contractors are not using the assigned crusher site to recycle the muck and dump the material. This is being done to save transportation costs, they added.
Affected people said that the stonecrusher owned by the contractor is installed at 18/2 point on the Shimla Tatapani road. Yet, it has been found that the contractor is dumping excavated material into private lands by paying the landowner 500  rupees per truckload. Moreover, no check dams were being made on such rented/leased lands before dumping, they informed.
When the matter was taken up to concerned contractors to know why spilling muck down the hill, they responded that Sai Construction had taken such land on lease for dumping.
However, the reply by the contractor gives birth to a number of concerns. Firstly the repercussion of this action is that the state project, which would be a few hundreds of crores in cost,  may now wreak havoc due to unscientific dumping on the downhill. Second, this is in flagrant violation of environmental norms. Thirdly by implementing this scheme of taking the land on lease for dumping, the state agencies and the said contractor are trying to shy away or disown the environmental concerns of such flagrant violation. Why? As once the muck is dumped on private land, it would be the landowner’s responsibility for any havoc that may be caused due to landsliding downhill. Besides, here, in this case, to astonishment, the State pollution control board has also not taken any cognisance of the open spillage of muck which is causing air and soil pollution.
Local people being allured by the construction company of payment in lieu of dumping could not be termed a legitimate trade. Besides, such landowners, perhaps, are unaware that if muck is not immediately removed, then the land piece would become completely useless, or nothing could be constructed on it ever due to the continuously sinking area.
The Town and Country Planning department, which are planning to increase the ambit of their planning, could not allow land leasing for dumping site purpose. It seems that various authorities are displaying feign Oblivion to this illicit trade, or they are in deep slumber.

BJP candidate from Chamba gets relief from conviction