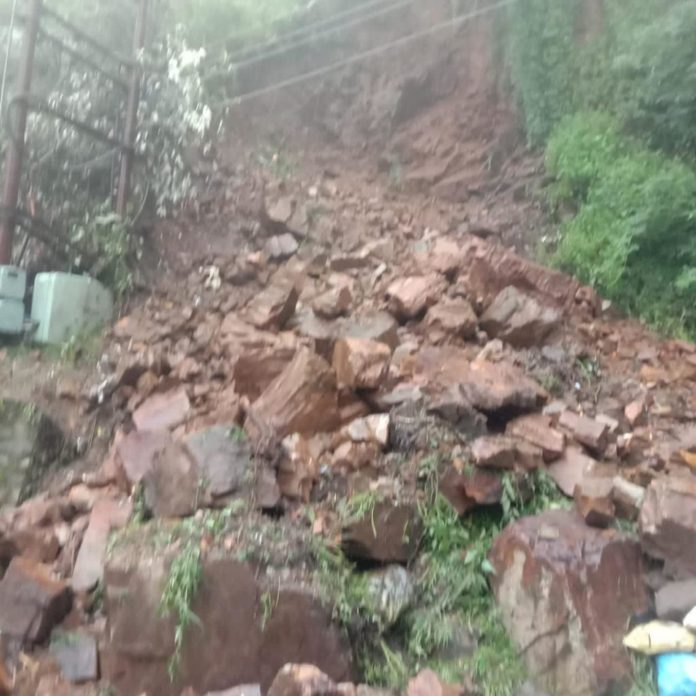 Incessant rain, cloud burst, flash floods and rising of water level of various nallahs and rivers in the state kept normal life out of gear on Wednesday morning in Himachal as Twelve  people including women and children either were washed away or are missing in floods and landslides incidents. Besides, more than 250 roads are disrupted in the state including Chandigarh-Manali-Leh National Highway.
State disaster management authority said that ten people are missing in Udaipur subdivision of Lahaul Spiti district after an incident of flash flood due to cloudburst occurred at Tozing nallah.
In this incident, one Private JCB and Two labourers tents have been washed away and it is  also feared that around 10 persons might be missing.
Injured identified as Mohammad Altaaf (age 19) S/o Nazir Ahmed, Vill. Kundar Thaar, J & K has been referred to Kullu.
Police & ITBP Rescue teams were dispatched but due to heavy flow of water further search operation got hamperred and would continue today.
Various Incidences occurred due to heavy rainfall in the tribal district on Tuesday. 50 to 60 vehicles are stranded in Kirting village after an incident of landslide near the village disrupting vehicular traffic on state highway  (SH-26) in subdivision Lahaul on Tuesday afternoon.
Earth movers and  JCB have been deployed in the affectted area to restore the road.
Second incident of landslide occurred at  Hawai Mode near village Kukumseri (SH-26)/ Sub Division Udaipur at 1710hrs on Tuesday also disrupting the road. JCB has been deployed by BRO 94RCC.
In the third incident water level suddenly rose in  two nullah at Darcha Shinkulla Road at 1720hrs. BRO informed that two Nallahs at km 24.7 and km 25 have bursted leading to washout of the road which has been closed for vehicular traffic.
District Administration said that that an incident of Cloud Burst has occurred on SH-26 at Jahalma Nullah near Village Jahalma in Sub Division Udaipur. In the incident a bridge link  the Jahalma village in Sub Division Udaipur has been washed away.
Manali-Leh national highways is blocked at Shaksnallah since 1755 hrs on Tuesday after a  flood has occurred near Village Keylong in Sub Division Lahaul. BRO would resume the restoration work after the weather is clear.
Sixth incident of flash Flood also occurred  at Changut & Udgos Nallah sub Division Udaipur at 1800 hrs yesterday. In this incident road has been blocked and, an old house of Tenzin Dorge, Village Changot has been damaged, a bailey bridge, a tractor has been washed away and there has been loss to agriculture land.
Residents near the river have shifted to higher locations. Estimation of losses is under process.
Eighth incident of flash flood reported at Bhaga river as water level of river rose affecting the life in Darcha village-Sub Division Lahaul.
As per information around 1815hrs yesterday water level in Bhaga river increased considerably due to heavy rainfall, impacting three shops nearby the river bank.
Allthe people having homes lying near the river bank have been safely evacuated.
In another incident at  Mooring Nullah/Sub Division Udaipur  state highway (SKTT) road has been blocked. However, no loss of any kind has reported in this incident so far.
Chandigarh-Manali national highways is also blocked after a landslide at Dabada, Jololla and Khoti nallah disrupting vehicular traffic between Mandi and Kullu town also.

A Woman identified as Poonam( 25 ) and her four years old son  Nikunj washed away in a local tributory of River Parvati called Brahamganga around 0615hrs today when they were passing by the side of a aforesaid tributory, owing to sudden surge in the volume of water. Both the victims are still untraceable.

Report of landslide is also coming from Theog subdivision of Shimla blocking link road between Sanj and Deha near Dhnot tehsil.
District Management Authority Shimla informed that a land slide has occurred at 0639 hrs this morning opposite to Tenzin hospital on Vikas nagar near Panthaghati road. Bypass road is not blocked however a  car parked alongside the road has been  damaged. no other loss reported.