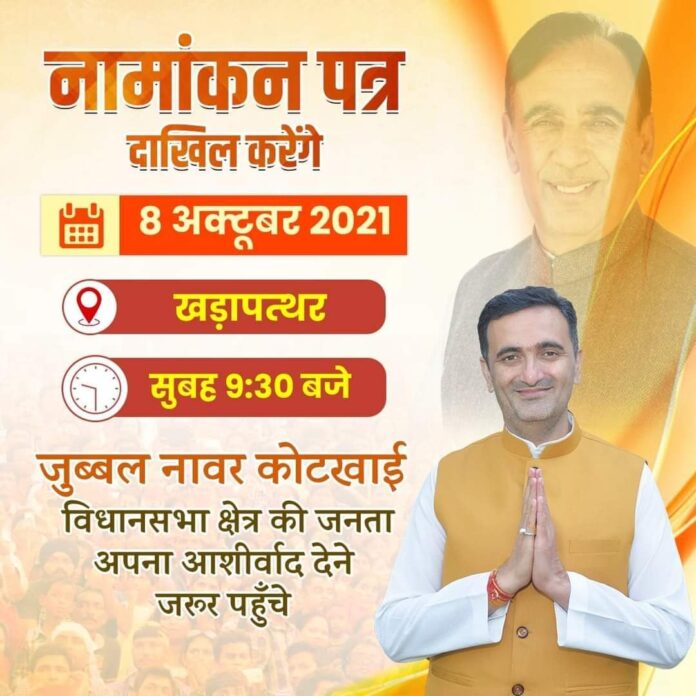 Shimla, Oct 8
Defying the party decision to keep out of election fray, Chetan Bragta, son of former BJP MLA
Narindra Bragta has filed nomination as an Independent candidate for Jubbal Kotkhai Assembly bye election here today.
Chetan Bragta turned up at Kotkhai on the appeal of thousands of supporters and loyalists of the former MLA to file nomination at 930 hrs this morning.
Younger Bragta told media persons that he took the decision due to the pressure of a large number of party voters however he is feeling hurt and cheated after being denied the ticket in the most ridiculous manner by the ruling party.
” There is strong resentment among a number of voters and my family, especially mother ( wife of former MLA ) as all of them are upset due to the sudden decision made by the party denying ticket to him ”
Party seemed to have taken this decision to not support dynastic politic , Bragta said putting question marks,  that then why did senior leaders directed him 15 days after the demise of his MLA father to prepare for the poll without wasting time while he was still in deep shock over the death .
He alleged that he was kept in the dark however he never insisted on a party ticket in place of his father. ” I would have been a happiest person or a disciplined party soldier if this fact was disclosed in time by the party leadership, he stated in a public meeting before filing nomination.
He lamented that there would have been no harm if the ticket would have been given to any else but the insult meted out by him and family could not be accepted and highly indignified.
” Mr Narinder Bragta who is now in heaven could not have faced this day as the party he served and irrigated with his blood and also dedicated his family members for its service, did a grave injustice by keeping him in the dark,” he stated in the speech which become viral on social media.
Number of party workers and supporters of the former MLA gathered during the filing of nomination as Chetan Bragta decided to go solo for allegedly some of the senior leaders of the ruling party had played with emotion and sentiments of the aggrieved family.
Now ruling party candidate Neelam Saraik who also filed nomination in presence of Chief Minister Jai Ram Thakur at Kotkhai on Friday has to face a two two-fold battle if Bragta continues to be in Fray. Oct 10 is the last date of withdrawal.
Party communique issued here today claimed that  Bragta would be pursuaded by them to withdraw his papers however both camps are keeping distance from each other.
Some of the loyalists of Chetan should slogan against the Chief Minister and party president for alleged injustice with Bragta.
As it has been stated yesterday that Chief minister Jai Ram Thakur and BJP president Suresh Kashyap
asked Chetan Bragta to meet them at Oakover in CM residence however he decided to not attend the meeting on the advise of  his supporters. The rival factions were of the view that CM and party president have nothing to offer him, asking him to not go alone.
Jubbal Kotkhai assembly segment at one time was a Congress bastion giving two Chief Ministers  however  Narendra Bragta succeeded to win here  in 2004 and 2017. This assembly segment fell vacant after his death recently and now a bye election is underway in the state as the polling would be held on Oct 30.
Congress have again filed former two time MLA  Rohit Thakur son of former Chief Minister Ram Lal Thakur in having strong mass base in Kotkhai area of constituency. The Jubbal area is considered the stronghold of Narendra Bragata. Naleem Saraik who is the official candidate of BJP is two time Zila Parishad member also belonged to Kotkhai area .  The contest likely to be triangular if the saffron party is not able to pacify the agitated young turk.

Update: Seven bodies recovered from Tozing nallah in Lahaul, whereas 4...