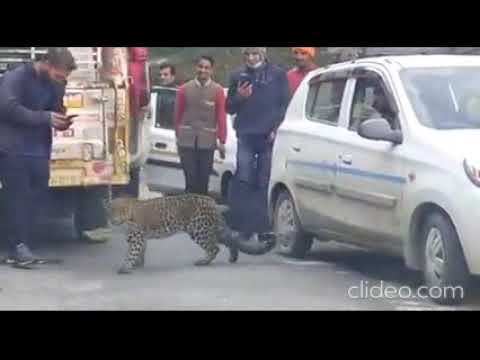 Tirthan valley part of Great Himalayan National Park in Kullu district witnessed a rare relationship between man and Leopard cub.  Four clippings of a Video about the same is going viral.
A Election party along with a candidate were on campaign trail when a young Leopard sudden came before the cavalcade. In a rare jesture the wild leopard cup was seen playing with humans.
The leopard was witnessed clinging on two men and was trying to climb over their woolen attire. But strangely the leopard did not seem agitated by the presence of people.
In the videos, some people can be heard telling each other to offer the leopard meat. After a while the cup suddenly decided to go towards a water rivelut.
This seems to be a rare video of closeness between the animal and human.
Tirthan valley is entry point of Great Himalayan National Park which is surrounded by large numbers of Leopard and other animals. The place is also known for Jajurana the state bird of Himachal Pradesh.