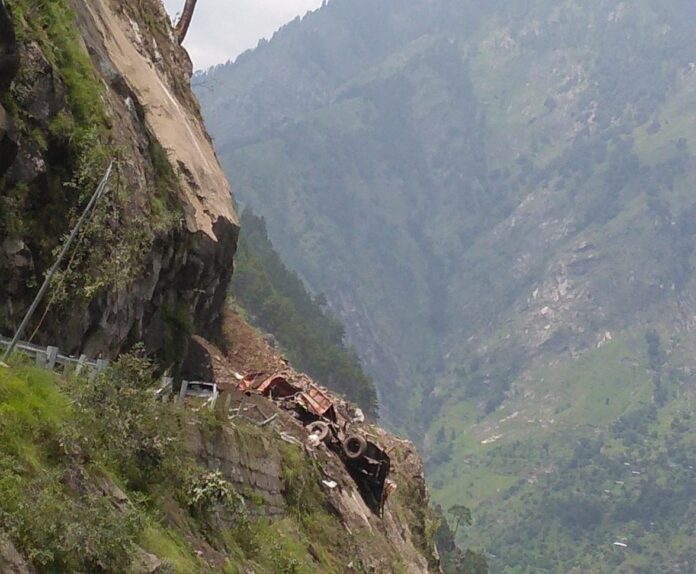 Himachal Pradesh Road Transport Corporation Bus and a Bolero Camper are still reported missing in the landslide mishap which occurred at Bhawanagar near Neugalseri in Kinnaur district , informed State disaster management authority in an update this evening.
SDMA said that bodies of ten people and 13 injured were recovered from the spot as these victims were occupants of three Small vehicles and one truck ( Tipper) recoverd in the rescue operation.
HRTC Regional Manager of Recongpeo Ajinder Singh informed that  a HRTC bus which was going to Haridwar from Murang and a bolero Camper were still not found under the debris at NH-05 after’clearing the landslides.
He said that at the time of mishap bus was parked on the spot and was occupied by around 18 to 20 passengers. He assumed that the bus may have rolled down as it was hit by the landslide and since there is no trace of the bus and car after clearing the road.
He said that it is not confirmed how many people were in the Bolero Camper.

Singh said that the bus was stopped at the accident site when the driver conductor and four to five passengers had came out of it to observe the shooting stones coming down from hillock. But due to a sudden massive landslide soon the bus and Bolero Camper become invisible along with about 25 passengers.
District Administration said that road has been cleared but traffic movement is not started yet. Rescue operation continues while filing this report.

Preparing for tourism in ‘World of Corona’