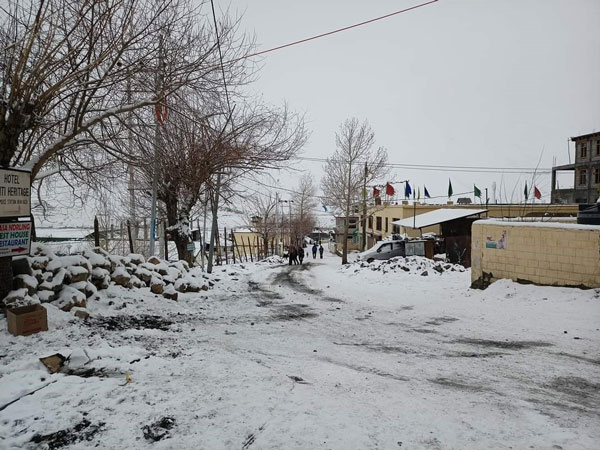 Shimla, Jan 14
The freezing temperatures in many areas of state continue keeping normal life out of gear as 227 roads, 157  power lines and 47 water supply schemes are snowbound and couldn’t be restored, said a state government spokesperson in a press release issued here today.
Many spells of rain and snow since January 2nd are keeping normal life out of gears. Despite improvement in the inclement weather conditions, freezing temperatures and mounting of snow in many places is hampering restoration work, which is moving with snail pace.
According to a bulletin released by the State disaster management cell said that vehicular traffic could not resumed on 227  roads including 224 link road.
Lahaul-Spiti district is most affected as 130 roads are snowbound including NH-505 (blocked from Gramphu to Lossar) and NH-03 ( Darcha to Sarchu). In Subdivision Lahaul 79 roads are snowbound, 41 in Udaipur and ten in Spiti area.
In Shimla District 35 roads are snowbound including ten in Rampur Subdivision, eight in Rohru, six in Dodrakawar, four in Kotkhai , three each in Chopal and Kumersen and one in Theog.In  Kullu 17 roads are still snowbound including 20 in Anni six in Banjar and one in Kullu. NH- 305 closed at Jalori pass and NH- 03 Closed at Rohtang Pass.
Six roads are snow bound in Chamba district including four in Bharmour one each in Dalhousie and Salooni.
Four roads are snowbound two each in Kalpa and Pooh Subdivision of Kinnuar district, 22 in Mandi district including 21 in Seraj and one in Mandi.
As many as 157 power Transmission lines are affected in the state including 80 in Chamba, 51 in Shimla, 18 in Kullu, seven in Mandi and one in Lahaul-Spiti. 47 water supply schemes are affected in the state including 26 in Chamba, 15 in Lahaul Spiti and six in Shimla district.
Temperature ranges
Minimum temperature of Keylong was at minus 13 degrees, Kalpa minus 6.6 degrees, Kufri minus 3.5 degrees, Manali minus 2.2 degrees, Solan 0.4 degrees, Sundernagar in Mandi was one degrees, Bhuntar 1.2 degrees, Dalhousie 2.2 degrees, Chamba 2.6 degrees, Shimla 2.8 degrees, Kangra 3.9 degrees, Jubberhati and Mandi four degrees each, Dharmshala five degrees, Hamirpur 5.5 degrees, Bilaspur six degrees, Una 6.2 degrees, and Nahan 8.3 degrees and Ponta-Sahib) 9.8 degrees.
The Met Office forecast mainly dry weather in the state.

Council of ministers decide for revised payscale to 2 lakh State...