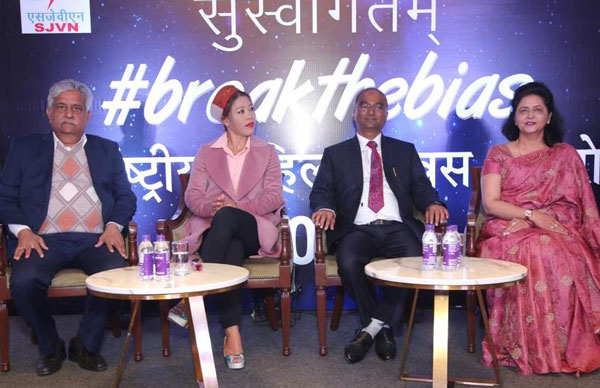 Renowned Indian women achievers  Mary Kom, World Amateur Boxing Champion and Member of Parliament, Rajya Sabha and Anju Bobby George, the famous Olympian Indian Athlete, propagated the message of “Gender Equality Today for a Sustainable Tomorrow”, here on Tuesday. NL Sharma, CMD of the organisation informed that the duo were invited by the state based PSU SJVN for a talk  for the company employees at Kufri, and at Chail, near Shimla todayon the occasion of International Women’s Day.

In her talk, Mary Kom, a recipient of Padma Vibhushan, India’s second-highest civilian award, in 2020, related the challenges she faced for coming up to the level of international boxing. Mary Kom is the only woman to win the World Amateur Boxing Championship six times, the only female boxer to have won a Medal in each of the first seven World Championships, and the only boxer to win as many as eight World Championship medals.

Speaking to the employees Anju Bobby George related how she was able to carve a history for the nation when she won bronze medal in long jump at the 2003 World Championships in Athletics in Paris. With this achievement, Anju said that she had become the first Indian athlete ever to win a medal in a World Championships in Athletics, jumping 6.70m. Anju George had been awarded the Arjuna Award in 2002, Khel Ratna in 2003 and Padma Shri in 2004.

Addressing the gathering Nand Lal Sharma, Chairman & Managing Director said that women are breaking traditional biases and achieving New Heights. He further said that our social fabric still must go a long way in our fight against these biases. Sharma lauded the efforts of  Mary Kom the World Boxing Champion, and Geeta Kapur the first full time Director in the Board of Directors of SJVN in breaking these biases. During the event Sharma also felicitated the only woman driver in Himachal Roadways Transport Corporation (HRTC), Seema Thakur. He further stated that efforts like that of Thakur are required for achieving gender equality in our society. He also presented a citation and cash reward of Rs. 25,000/- to Seema Thakur.

SJVN is a central PSU with a total portfolio of more than 16800 MW in hydro, thermal, solar and wind power generation.