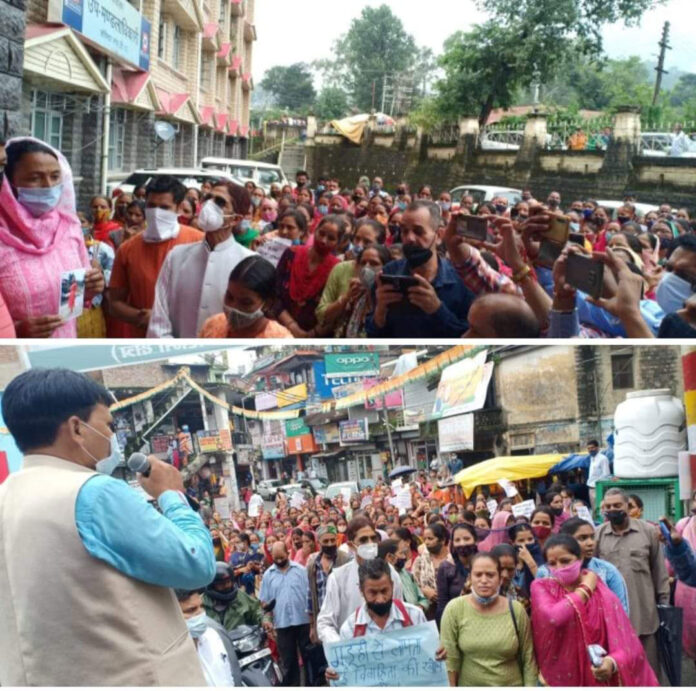 Himachal Pradesh Police constituted a special investigation team in the matter of mysterious death of a young woman at Gudahi village of Bharadu gram panchayat  of Jogindernagar in Mandi district recently.
Director General of Police Sanjay Kundu has entrusted the investigation of this case to the state CID Crime with immediate effect. A press release issued by the SP Law and Order from HP police headquarter confirmed that probe would be conducted into the FIR registered on August 19 ,2021 as the case has been lodged under section 498-A and Sec 306 of IPC AT Police station Jogindernagar.
The complaint was filed by the family members of victim alleging that Joyti was reportedly missing from her in-laws house however her body was recovered from a place after many days she was reported missing.
The parents of deceased complain that the victim was murdered and tortured before the death.
SP also informed that inspector General of Police CID- Crime Atul Fulzele (IPS) would constitute a SIT for the investigation of this case. The SIT would be headed by SP-Crime of state CID Virender Kalia also comprised of Mukesh Kumar, DSP- CID and Suhan Sharama -DSP CID Mandi.
The SIT shall complete the investigation expeditiously, in transparent and objective manner meanwhile IGP Crime would closely supervise the investigation of this case.
” In order to complete the investigation of this case expeditiously, in a fair and transparent manner and also to maintain public credibility, in the investigative process, DGP -HP has entrusted the investigation to state CID Crime with immediate effect” Press release issued here said today.
The matter

Body of deceased was recovered from a jungle after many days of her missing at Khaprutu and Pando area in the Jogindernagar. The  parents and the people belonging to the deceased parent’s village are deeply shocked over the incident and went to protest in the in-laws house of the deceased however local Zila Parishad member and CPI(M) leader Kushal Bhardwaj pacified the aggrieved family and villagers.
Bhardwaj also lodged protest along with the parents and others villagers at Jogindernagar to seek probe into the death of Joyti.