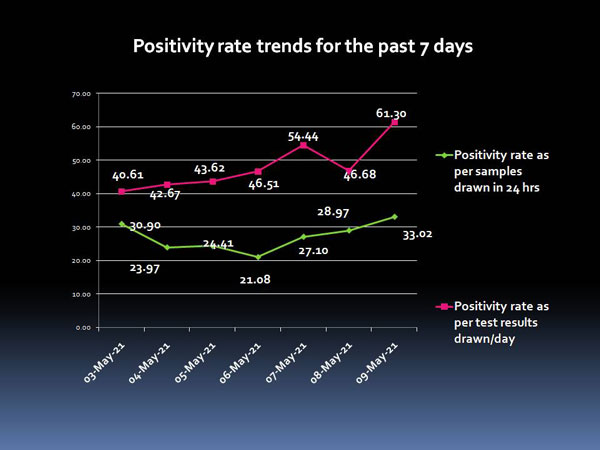 Half dozen of the 12 districts in Himachal Pradesh have reported a covid positivity rate of more than 30 percent over the past one week, according to state health officials. For the week ending Monday, the state recorded nearly 29 thousand new covid cases with a positivity rate of 29 percent (percentage of confirmed cases among total number of people tested), a health official said.

This was much higher than the national positivity rate of 18 percent recorded in India during the week. Himachal also recorded a higher case fatality ratio of 1.5 percent during this period as compared to 1.1 percent in the country, with 439 covid deaths occurring here during the week.

A health official said that during the ongoing second covid wave, a large number of patients are reporting post-recovery symptoms such as fatigue, bodyache, cough, sore throat and difficulty in breathing.

“As of now, there is limited evidence of post-covid complications. So a holistic approach is required for follow-up care and well-being of all patients even after recovery,” said the official, adding that recovered individuals must share their experiences with others using the social media to increase awareness and dispel myths.

The Ontario province of Canada has reached out to Himachal government to provide ventilators and oxygen concentrators while Panjab University, Chandigarh on Tuesday gave 40 air purifiers to Himachal which had been donated by a US-based company.

On Monday, the state received 100 oxygen concentrators from the World Health Organization (WHO) and 200 oxygen cylinders sent by England,” said Ramesh Chand, deputy director at the state health department.