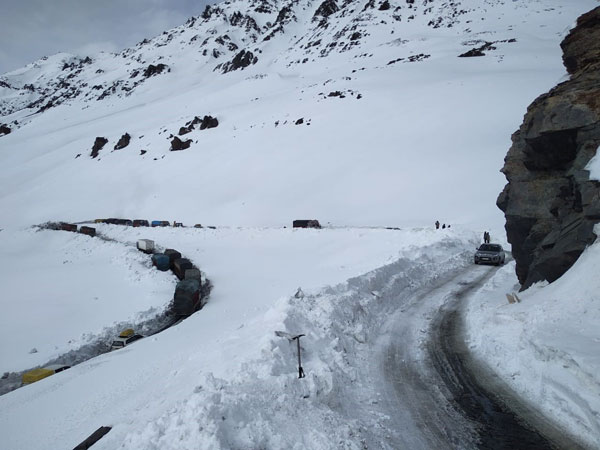 The state witnessed four days of intermittent snow, hail and thunderstorms – a rare wet spell which caused temperatures to drop to a record low at this time of the year and revived winter-like cold conditions moreover many places of sate witnessed snow in the month of April after decades.

On Friday morning, several areas of Shimla’s apple belt received snowfall after days of heavy rain and hail.
“The upper reaches of Jubbal and Kotkhai saw several inches of snow today before the weather cleared up. The last time it had snowed in these parts during this season was in the 1960s.
Back then, few people had apple orchards and so the snow did not worry them. But this time, snow and hail have damaged the apple plants putting people’s livelihood at stake,” said area resident Vijay Singh Thakur.

It also snowed in other parts of the district including Narkanda, Rohru, Khadrala and Dodra-Kwar. In Manali, it snowed in April after 25
years, residents said.

Meanwhile, higher reaches of the state such as Lahaul and Kinnaur have been receiving heavy snow since Tuesday.
Kalpa in Kinnaur recorded over 23 centimetres of snow on Friday till
evening.
Precipitation this week triggered a cold wave, with temperatures falling to a record low. On Friday, the day temperatures were 11 to 12 degrees below normal on an average, weather officials said. In Manali,the maximum temperature fell to six degrees Celcius – which was 17 degrees below normal.
In Shimla town, where it rained the highest ever in a 24-hour-period in April since 1979, the night temperature dropped to four to five degrees over the last two nights.

Inclement weather over the last four days has led to a number of landslides and avalanches, and disruption of transport and power services in parts of the state. Several remote villages in the high hills were unexpectedly cut-off from the rest of the state.
Landslides claimed the life of one person in Kinnaur and several livestock
animals in Bharmour.
The wet spell has also caused severe crop damage, especially to wheat and apple crops, but is expected to benefitvegetables. It has also revived water sources and water supply schemes.

In the wee hours of Friday, a five-storey building caved in and
collapsed in Sanjauli suburb of Shimla due to heavy rain. Luckily, no
one lived in the building except the caretakers who had been safely
evacuated a day earlier, a police officer confirmed.