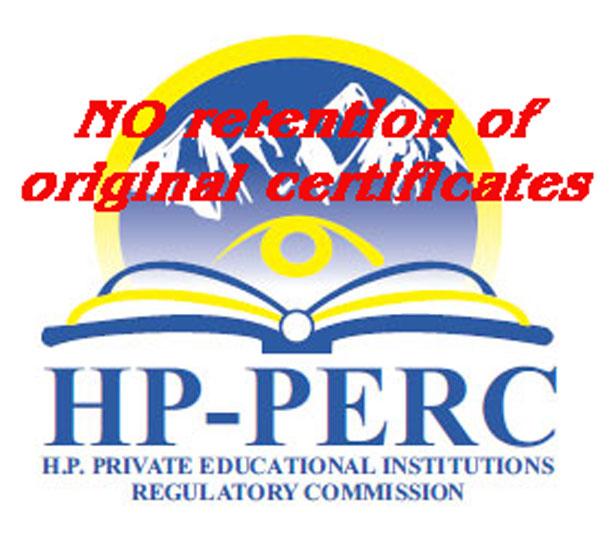 Shimla, May 20
In a matter which has come to light it has been found that the the Himachal Pradesh State Private Educational institutions Regularity Commission (HPPERC) has removed an important order from its website which was helping a number of students. In June 2021, the HPPERC had passed a landmark order in favour of number of students who are pursuing their Education in the Private Sector Indus International University Una a year ago, slapping a fine of tune of Rs 50,000 and directing University to release the withheld original documents, certificate and degrees to student in violation of rules, order issued by High court and Supreme court.https://himachalscape.com/no-university-college-shall-insist-students-to-submit-original-certificates-directs-state-educational-regulatory-commission/
The Petitioner in the matter, Bharat Bhushan, said that he got relief from the HPPERC in a six-page order passed by Chairperson Major general Atul Kaushik on 4-6-2021 copy of which is with us. He said that he would lodge a Complaint to the Himachal Pradesh Governor against removing this order from the Commission website as it was helping hundreds of students whose original degrees and certificates were withheld illegally by private universities/institutions. “I got a respite from the HPPERC as affected students were provided certificate from this university,” he added.
Another affected candidate said that this order helped about three hundred-odd students victimised by the University. He said that number of such victim students were downloading this order from the Commission website and getting their original certificate released from the Indus International University and other Institutions based on the verdict passed by the Commission, which was an easy remedy to get relief from exploitation by these private institutions of higher learning.
It is worthwhile to mention that based on media reports National Commission for Scheduled castes and scheduled Tribe have issued a show cause notice against the state government seeking filing of FIR against such universities and private Educational Institutions. It has been found during the CBI probe of SC/ST Scholarship scams that not only degrees and certificates such education Institutions were keeping bank passbooks against the law of beneficiary students drawing crores of rupees from central funded scholarship scams.
During hearing in the HPPERC, the Indus International University had defended it Scholarship Scheme, forcing them to keep original documents or certificates, as frequent audits or verification required them to do so. However, Commission, in six paged orders, clearly stated that it could not do so against the rules. Moreover, Petitioner Bharat Bhushan said before the Commission that the High court order debarred such withholding of certificates.
HimachalScape also raised the issue of the removal of such an essential order with Secretary HPPERC Mast Ram. “The order dated 4.6.2021was withdrawn /removed because it mistakenly carried Adhar no.of the complainant which can not be revealed as per law. We are uploading the same for benefit of general public with concealment of Adhar id,” he stated in his reply.
The matter came to light when recently, some of the affected students complained that this 6-page order was removed from the website and it was replaced by one page order which shows that matter is being lingered on behalf of Petitioner and Respondents University failing to comply with the previous order of 4-5-2021. This order seemed to be issued overlapping the actual order of HPPERC of 4.6.2021 to favour the errant University. However, reply from Commission couldn’t be received on the unprecedented issuing of the order, which did not exist until January 2022. Now it seems that Commission succumbed before the pressure of Pvt Institutions, which did not want to mend their exploitation of such students.
A number of Pvt Education Institution are already under the scanner of CBI to probe scholarship scam. Moreover, the university couldn’t hide under the guise of successful evading such an order by removing it from the website. The matter needs to be thoroughly probed by the commission itself to restore its impartial conduct and official ethics mandated under the Himachal Pradesh Private Regularity Educational Commission Act.