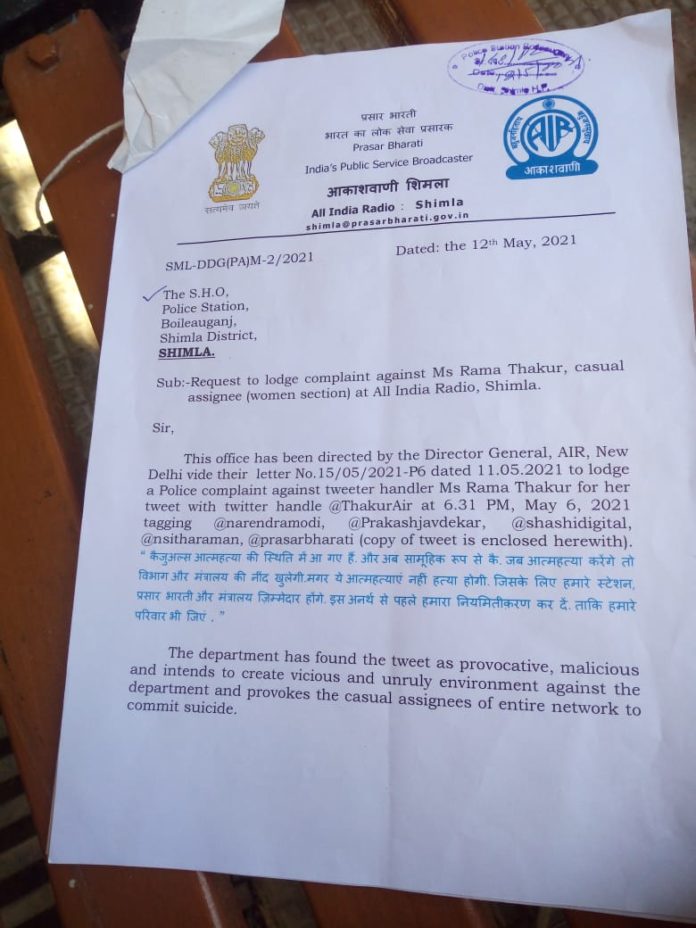 Shimla, Jun 6
All India Radio Shimla filled a police complaint against a casual woman assignee recently for allegedly showing discontentment on Social media about six months delay in payment of their dues and issuing assignment arbitrary.
The Complaint moved by Shimla AIR program executive Umesh Kashyap in police station Boilueganj alleged that  twitter handler and 15yrs old casual(staff) Rama Thakur made two tweet on May 6  tagging PM  Narender Modi, Union Information and Broadcasting Minister Prakash Javedkar and others .
In the one tweet she wrote ” please tell us the department forced to face the police enquiry and get her statement  recorded not only this her booking as casual assignee has also been discontinued by AIR Shimla where salaries of one or two months  are paid after six months. how casuals will run their homes. the officers at all india radio in shimla assigned  full duties to their close ones, where others have to go.”

In another tweet she wrote ” casuals are in a suicidal situation and now when casuals will commit suicide then department  and ministry will wake up from slumber. this would not be suicide but murders and our station, prasar bharti and ministry will be responsible for this., regularise us before this mishap so that our families may live.”
Instead of getting relief after raising voice in social media or get remedy, the casual staff of AIR invited anguish of the public broadcasting management.
Soon after her tweet  directorate, AIR  New Delhi sought action on the casual as on May 11 , R K Tyagi ADP directed the  Head of AIR shimla to lodge Police complaint against the it’s own casual staff.
Tyagi passed a direction to Shimla AIR that tweets are provocative,malicious,and intends to create vicious and unruly environment against the department and provokes the casual assignees of entire network to commit suicide.
The victim casual was immediately ordered to discountine from her further assignment as the issue was approved by the CEO, Prasar bharti.
The victim were called to police station on May 18 and had to face truma.  Under the durass of AIR program officer Police staff on May 27  allegedly didn’t record the statement which she had narrated.
On next day on May 28, the victim again turned up in the police station and met SHO to write her  statement in her handwriting and handed it to the SHO .
She  revealed that these tweets were  part of the campaign  initiated by the casual staff union to press for genuine demands and nothing else. We were not getting salaries for six months, she added.