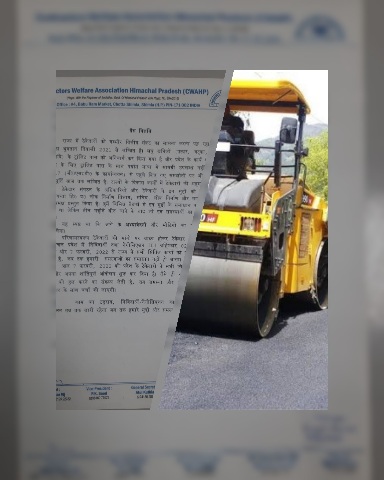 Shimla, Feb 7
Himachal Pradesh Government affiliated  contractors have decided to stop all construction work in state from today on the call of a peaceful protest by Himachal Pradesh Contractors Welfare Association .
Contractor Association executives and contractors have represented these issues time and again with the worthy Engineer-in-Chief HPPWD, worthy Secretary (PW) and Chief Minister. “We were assured of a resolution of these issues in various meetings”, stated a press communique.
Satish Vij president of SCWA said in a statement issued today that contractors are instrumental in the developmental works of the state however after a lapse of 3 months these issues have not been resolved.
“It was clear that further representations and meetings would not yield any result. Consequently on demand of contractors, the Association of Himachal Pradesh was forced to take the drastic step of calling for boycott of tenders and negotiation, and stoppage of all civil works in the state from 7″ Feb. 22 till their issues are resolved. ” he said
This stoppage of work, boycott of tenders or negotiation and peaceful agitation shall continue till our issues and problems are actually resolved, they added.
Contractor in large number gave representation to administration and agitation has been peaceful at all places, Vij added.
There are around 20,000 goverment contractors in the state.
Reacting over the protest Chief minister Jai Ram Thakur said that this issue is not related to state government and contractors should sought relief from the court as goverment is ready to release the pending dues of contractors if Court exempt it from its order.