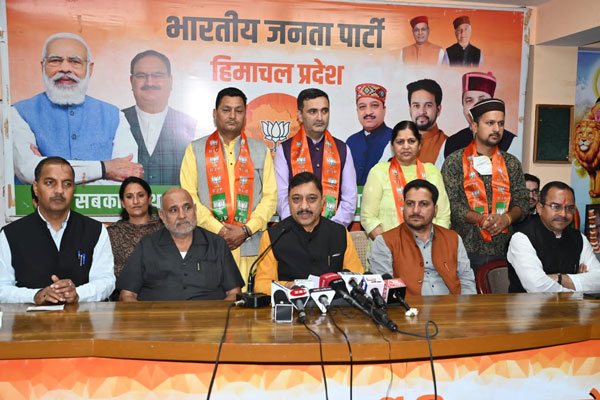 Shimla, July 28
Ahead of the upcoming assembly election today, the ruling BJP has reached out to its four rebels while opening gates for them. Former CPS and MLA Urmil Thakur from Hamirpur, Chetan Bragta Jubbal-Kotkhai, Rakesh Chaudhary from Dharamshala and Joginder Panku zila Parishad from Shahpur joined BJP in the presence of BJP State Incharge Avinash Rai Khanna, State President Suresh Kashyap, General Secretary Rakesh Jamwal, Trilok Kapoor and Trilok Jamwal in BJP office today.
A year before, , the saffron party which said goodbye to dynastic politics, seems to have compromised its stand. Perhaps, they have decided to put the house in order by giving entry to those who had been in an electoral battle against the saffron party’s official candidate.

Party president Suresh Kashyap said that by these joining, the party would get strength and would be heading towards elections in a more attacking mode.
Chetan Bragta is the son of former Minister and BJP leader Narendra Bragta. He contested the assembly By-poll last year, forcing the party organization candidate Neelam Sariak to forfeit her security deposit.
Urmil Thakur had won the assembly elections from Hamirpur in 1998 and 2007 but lost in 2003. She was shifted to Sujanpur in the 2012 assembly polls and lost to Rajendra Rana, who contested as an independent. She was the elder daughter-in-law of former minister Late Jagdev Chand Thakur. Her husband Bhupinder Singh Thakur was an officer with the Department of Agriculture.
OBC leader Rakesh Chaudhry was in AAP. Chaudhry had contested as an independent candidate in the assembly polls. He got 8000 votes as an independent. Chaudhary wields considerable influence in the Lower OBC-dominated belt of Dharamshala.

Alert- Death of COVID positive at IGMC, was admitted for orthopedic...