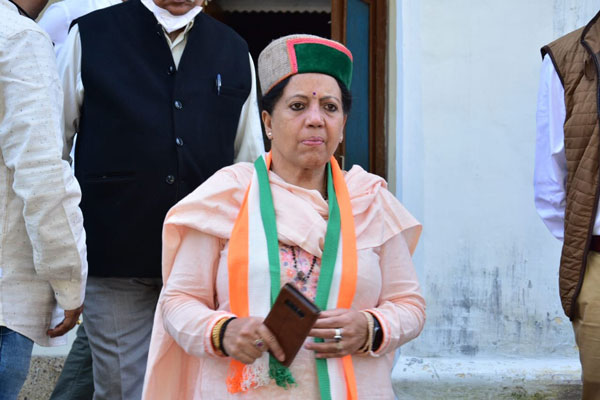 Shimla, Sept 16
Ahead of Union Minister Smriti Irani’s visit to Rampur on Saturday, Congress State president Pratibha Singh has launched a attack on her, by taking up the issue of refill of LPG cylinders given under Ujwala Yojna. Singh said that the Union minister had claimed that 1.36 lac free cylinder were given in H.P, under the scheme. “However the reality is that only 9415 women are able to refill those cylinders,” alleged Singh in media conference here today. The Congress leader stated that  only 51 percent of the households in Himachal have cooking gas.
She added that, when during UPA regime, Samriti Irani had come to Rampur, had termed the LPG cylinder worth Rs 450/- (then) as very expensive. She had promised the people of Rampur, that if voted to power, then LPG prices shall be reduced. However, as soon as the Modi government came into power, instead, they withdrew the subsidy on LPG and also increased the prices multi fold, alleged Singh.
Now people of Rampur expect a explanation from Irani, about the broken promise of the past. “The situation is that today the LPG cylinder has crossed Rs 1100.  In Himachal, the BJP is talking about giving free gas connections to the people under Ujwala and Mukhyamantri Grihini Yojna, but women are unable to refill the gas due to the cost inflation, stated Singh.
She added that 1.36 lakh gas connections were given in Himachal under the Ujjwala scheme in 2018-19. Then in 2019-20 only 83177 cylinders were refilled in the state. And in 2021-22, attributed to the exorbitant cost, only 9415 cylinders could be filled, claimed Singh.
She said that in 2019, during election year the Central Government had given a subsidy of 37209 crores on gas. In 2022, the same came down to only 242 crore. “Moreover contrary to the government’s claims of 100 pc  gas connection, only 51.7 percent of the households in Himachal have LPG,” claimed the Congress State president.
Along with, Congress leader Alka Lamba said that due to inflation and rising LPG prices, women of Himachal now want to return the empty cylinders to Smriti Irani during her visit to Rampur.  They will demand that either the gas prices should be reduced or the government should take them back. Lamba said that Modi government became first Government in the history of Country which imposed GST on milk, curd and children’s pencil. Congress leaders said that party wants to provide immediate  token amount of 1500 rupees pet month to give relief from inflation, if voted to power.
Tomorrow local women would show black flags to Union Minister Smriti Irani, added Lamba.

No 50 per cent discount to woman while booking online: HRTC