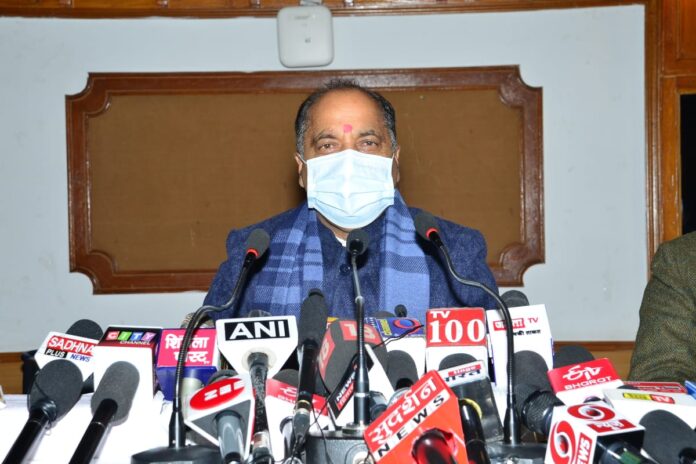 Shimla, Jan 12
Himachal Pradesh Chief Minister Jai Ram Thakur said here today that Modi’s rally was not cancelled due to any security lapse at Ferojpur in Punjab but it was shear conspiracy against the Prime minister under planned manner. Chief Minister Jai Ram Thakur was addressing a press conference here today.
He targeted his counter part at Punjab Chief minister Charanjit Singh Channi said that the compromise with the security of the PM in Punjab was no coincidence.  Thakur said that the matter is in the Supreme Court now could be a well thought out conspiracy.
Giving clean chit to the SPG  CM Jairam said  that doubts had been raised about the Prime Minister’s route by the central agencies, but the Punjab government did not take any steps.
Commenting on the issue in special convened Press conference Chief minister pointed out that when the protesters blocked the path of PM, Punjab Police Jawans were also enjoying tea along with protesters.
He said that Punjab Congress government now displaying feigning oblivion about security threat had CID inputs about PM security since January 2.
He said that Punjab government was alerted many times by the intelligence agencies, but no effectivr step were taken by the government.
Himachal Chief minister blamed Cong rule of Punjab that it was also alerted about the Khalistani faction activity in the state but PM security was compromised. The Chief Minister said that the schedule of the Prime Minister’s arrival in Punjab on January 5 was fixed.
He said that the entire program of the Prime Minister’s visit was sent to the state government.
Punjab government are playing in the hands of prokhalistani millitants who issued the bounty to shot the prime minister in public, he added.