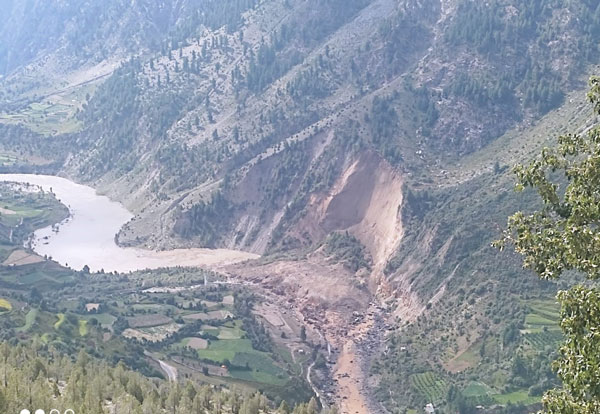 Shimla, Aug 13
Massive landslide at Nalda village of Udaipur subdivision of Lauhal Spiti  district disrupted the flow of Chenab river (Chandrabhagaha) this morning. Deputy commissioner Lahaul Spiti Neeraj Kumar said that Chandrabhagha water flow has started over the landslide
blockade. He said that things are under control and all downstream villages have been evacuated as per preventive measures. The villages including Nalda Dasrat, Tharot, Udaipur and Matgaon are located on the downstream of the landslide.
The Landslide occurred near near Village Nalda Sub division Udaipur District Lahaul &Spiti at 0930 hrs in which the flow of Chenab river had been blocked.  So far no loss of life or property has been reported in this incident.
Earlier river has blocked (10-15 per cent ) water discharge following which the administration had to evacuate the Nalda low line villages near the flooded river.
A helicopter aerial survey and ndrf team deployment is underway and administration is taking stock of everything.