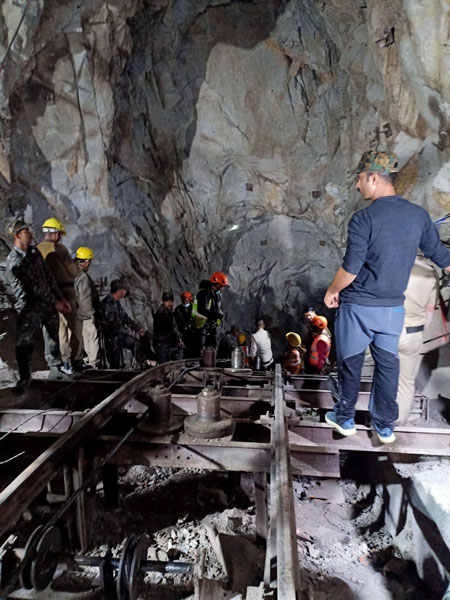 Shimla, May 7
Deputy Commissioner Kinnaur Abid Hussain Sadiq ordered a magisterial inquiry into the tragic accident in the Tidong project near Moorang tehsil of the Kinnaur district. Additional District Magistrate Pooh Ashwani Kumar would conduct a Magisterial inquiry into the incident and submit the inquiry report to the DC within a week. Deputy Commissioner said that an FIR has also been registered to probe the negligence adopted, which endangered the lives of workers.
It is noteworthy that in Moorang tehsil of the district, at 5:45 am today, five persons got trapped inside the tunnel due to the rupture of the ropeway pressure shaft in the Tindong project.
The Deputy Commissioner said that after a lot of hard work by the NDRF, Home Guard and ITBP personnel, five persons trapped in the tunnel were evacuated, of which three  were found injured and two were found dead.
He said that the two dead had been identified as 48 years old Chamanlal son Lekhram village Mundkar Tehsil Bhoranj district Hamirpur and 23-year-old Xavier Suren son Kristaniyar Suren Siskari Toli, Seligotu, district Gugla state Jharkhand. He said that the three injured persons had been identified as Polus Guria, son Kiran Guria, Ronne Dugang Dhiri district, Khunti state, Jharkhand, Vikas Kumar, son of Rajesh Patel, police station, Harpur, ward number 8, village, Nayak Tola, post, Harpur, East Champaran, state, Bihar and Vishal Kumar, son of Narayan Patel, village Gamharia. Ward No 1 Post Office Hardia has been established as East Champaran State Bihar. He said that the victims were working for Himalayan Construction Private Limited Company.

14 injured as a pvt bus overturns on the road