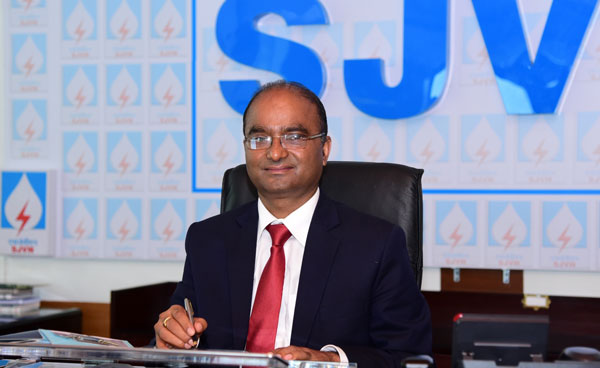 Himachal Pradesh based ‘Mini Ratna’ PSU, SJVN has submitted an intent to develop 10000 MW capacity Solar Power Projects in the next 5 years in Rajasthan. The State government has accepted the proposal of SJVN and MoU in this regard will be signed shortly.

Talking about it, Nand Lal Sharma, CMD, SJVN informed that SJVN intents to establish 10,000 MW Renewable Power Projects/Parks on the Land Banks to be allocated by Rajasthan Renewable Energy Corporation Limited in the State. An estimated investment of Rs 50,000 crore is proposed by SJVN on developing these Projects. The commercial production will commence in a phased manner and the power generated will be transmitted to the beneficiaries through nearest Sub-Stations. Power Purchase Agreements for the generated energy will be signed through competitive tariff-based opportunities available in the market. Adding, “SJVN has proposed to develop Solar Power Projects in Rajasthan as the state has largest solar power potential in the country. It receives the highest solar radiation (5.72 Kwh per meter square per day) and also has the highest number of more than 325 clear sunny days in a year. All these factors work in our favour of developing the Projects.”

He further added that these projects will usher Socio-Economic development in the Project areas and also open up avenues of direct and indirect employment to about 15,000 people.

Sharma said that driven by the commitment of Government of India to achieve 500 GW of installed capacity from non-fossil fuel sources by 2030, SJVN has re-engineered its Business Model and has given a major thrust to its Renewable Energy portfolio in a big way.

Sharma told that SJVN has 2750 MW of Renewable Energy Projects in its portfolio. He further added that the company has recently upgraded its Shared vision to installed capacity of 25,000 MW by 2030 & 50,000 MW by 2040. The revision of targets is a result of SJVN being awarded Mega Power Projects in India and abroad, he concluded.

Dosier of Info about ACC & Ambuja Cement plants: Does Sukhu government want to take back control ?