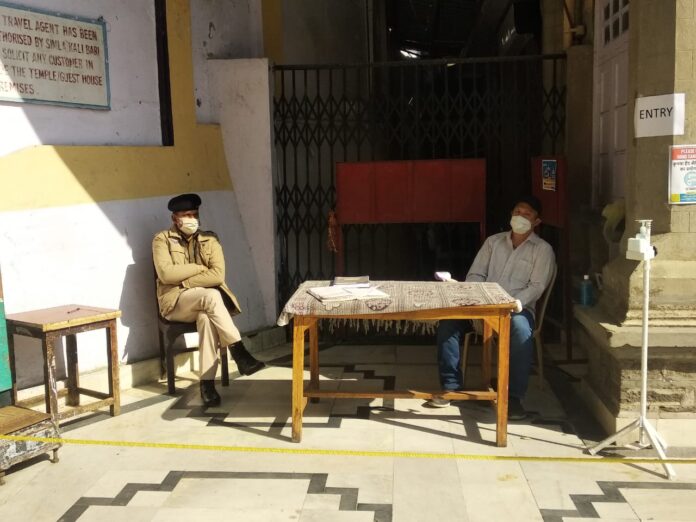 On the second day of Navratri, the famous temple in the city wore a deserted look. As compared to the normal times, this year by the time data was collected the visitors count was only 133. The festive spirit seems to have taken a major hit as people are not coming out of their houses even on the auspicious time of Navratri.

“Being Sunday, I feel that people are not visiting the temple in large number. The market is all closed and not many people are interested to go out when they cannot do anything else in the market” says Pawan, an employee who has been appointed by the department to record temperature of the visitors.

It is to be noted that in yesteryears, temple were always bursting out of it seems with devotees flocking to pay homage and there was hardly a place to keep one’s foot in the temple throughout the Navratra. However, unfortunately due to Covid and strict SOPs people now seem to shy away from stepping out.

“People know that they cannot go inside the temple and sit for prayers nor can they offer anything in Poojan. No one is being allowed to stand in front of the idol for long, it is just like you get a glimpse and move out and no devotee is satisfied with such arrangements but the times is such where nothing much can be done either”, says one of the Priest of Kalibari temple.

The business of the local prasad sellers too have faced the blow as shared by Sukhvinder Singh, “Today is the second day of festival yet since morning there is hardly any customer. Till noon only few number of devotees visited the temple which can be easily counted on fingertips maybe by evening we can expect some business.”

Educational institutions including teaching and non-teaching staff closed till April 21:...