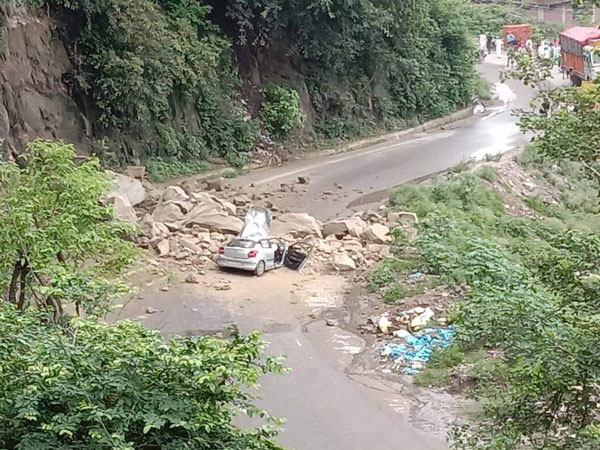 Shimla, Jul 27
In another road mishap occurring due to inclement weather, a car plying on road was hit by a heavy boulder injuring a person in the Trilokpur subdivision of Kangra district, said Kangra district administration. District Emergency Operation Centre Kangra said in a press communique that a car met with an accident due to a rock fall near Trilokpur in sub division Nurpur at 1600 on Tuesday.
The injured person reported is hospitalized at Civil Hospital Nurpur after the mishap.
It is worthwhile to mention that on Sunday in a similar incident nine tourists died and three others sustained injuries when a heavy boulder hit a tempo traveller at Batsari area of Kinnaur district in the state.
An advisory was sounded by the state disaster management authority that tourists should avoid to go near the river, landslides prone and flash flood affected areas during the heavy rainy season as red alert was sounded time and again to avert such mishaps.
During last one month natural disaster and flash flood have killed as many as 175 people including 16 person in Kangra district recent flash flood.