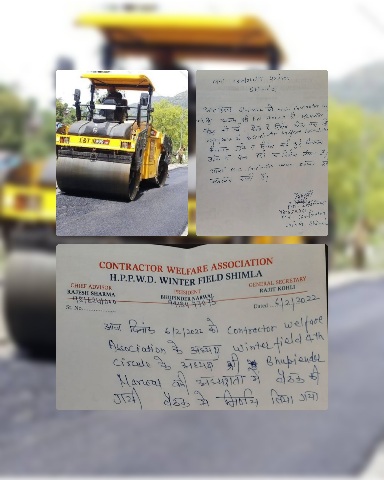 Shimla, Feb 6
The anguished contractors affiliated with Himachal Pradesh Public Work Department decided not do any construction work of Himachal Pradesh Government in protest against not releasing their long pending payments despite completion of alloted works.
Contractors unanimously decided to not do any work in the state of Himachal Pradesh rejecting appeal of State government to not delay state development projects.
In a meeting held at HPPWD IV the Circle Winter fields Contractors Welfare Association of HPPWD under the leadership of president Bhupinder Narwal decided to stop the work on all the construction works with effect from tomorrow.
Currently number of contractors have not been paid since years by the state government following a pending litigation in the Himachal Pradesh court.
SMC contractors welfare union also decided to extend support to the call of boycott of construction work by the HPPWD Contractor Welfare Association. President of SMC contracters welfare Union P N Sharma said that a meeting was also held by the Union on Saturday to discuss the issue.
Urban Development Minister Suresh Bhardwaj also appealed the contractors on Saturday to not boycott the state government development projects and construction works and help the government to open snow affected roads.
With call of boycott or stopping of the development works has posed a constitutional crisis to State government as it could not disobey the court order or release pending dues of contractors after years of completion of contract work.
The Government also had knocked  the door of court in the matter in first week of the last month but High court said in its order to set up a department Committee to ensure if contractors have ensured compliance of government contract rules regarding submission of documents pertaining to procurement of construction materials.
During the winter session of the state assembly at Tapovan (Dharmshala) on Dec 2021  IPH Minister Mahinder Singh Thakur stated that the condition to submit the M form was imposed on the court order .He said that case was listed in the court in a few days and government would asked it’s counsel to plead the matter. He has also assured  that govt would seek to get exemption for such projects from M- form condition which are alloted before passing the court order.
Congress MLA Asha Kumari and CPM MLA Rakesh Singha had alleged in the house that delay of payment of contractor tune to Rs 200 Cr in the public works department due to the unnecessary conditions of M-form.
MLAs said that most of payment is being delayed of Mandi and Shimla district and contractors are not able to complete their other works due to shortage of funds.