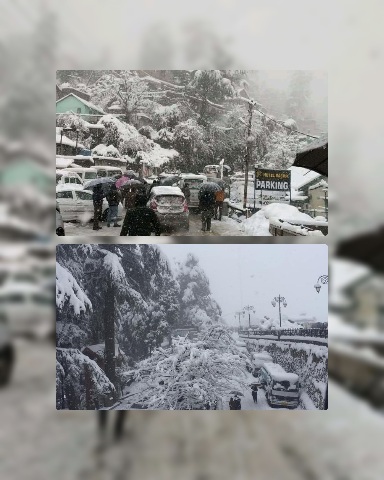 Shimla, Feb 6
Govt and authorities are facing sharp criticism being alleged for sloppy pace of snow clearence in Shimla district. Talking about it the district unit of the Communist Party of India (Marxist) has sought early restoration of normal life and comple clearance  of snow from public places of Shimla city which is still affected  due to recent snowfall.
A Press release issued by the  Sanjay Chauhan, party  district secretay, criticized the claims made by the government and the Municipal Corporation Shimla about working on warfooting to deal with the aftermath of the heavy snowfall.
The way Administeration has kept the town closed for two-days exposes thr steps taken and arrangements made to ensure the safety of people despite red and orange alert been issued three days ahead of Snowfall, he stated.
Due to the mismanagement of the state and SMC, even today the motor able  roads have not been fully cleared and  opened in the state capital Shimla, he alleged.
” The communication of towns could not restored on the fifth day of Snowfall as most of roads connecting Shimla with other parts of the state are still closed.” party leader alleged
He said that drinking water and electricity supply has not been smooth in many villages of Shimla city and district.
In Shimla city, commuters are facing extreme hardship to walk on the slippery roads and paths leading to hospitals couldn’t opened to provide emergency Health care. The general public is facing a lot of trouble due to non-operation of buses and halting the movement of Ambulance on the snowy road to take patients to the hospital.
“The work that should have been done as per the Snow Manual and Disaster Management Manual set by the Government and the Municipal Corporation to deal with the snowfall was also not taken into account, due to which the chaos has increased further.” he said.
No proper arrangement has been made to dump sand on the roads.  If the government does not open the roads immediately and does not restore the supply of electricity, water and other essential commodities immediately, then the party would be forced to agitate
Party said that more than 60 trees have fallen in the city and caused huge damage to private and government property. He said that hundreds of people have been injured due to falling on ice and snow related mishap of vehicles.
Tourists also have to face a lot of troubles in reaching the city and leaving the city. To clear the snowfall, machinery and labor and other materials have been arranged.  Chemical and sodium chloride will be used to clear the snowfall. But after the snowfall, the elected representatives of the government and the municipal corporation are almost missing and there is no coordination between the departments of the government.
Due to lack of coordination in the departments of the government, the problems of the people have increased further.  The supply of essential commodities like milk, bread, gas to the public in the city is also not being done smoothly, he alleged.
The party demanded that the government should immediately look into the demands of the contractors and solve them and run the developmental and other works smoothly.

Positivity rate trends for past 7 days in Himachal Pradesh