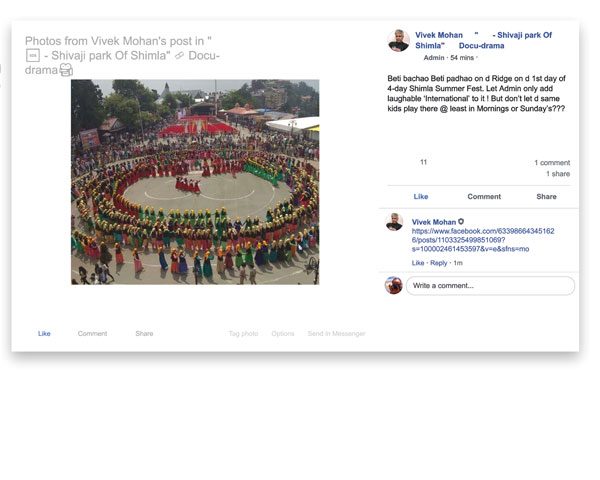 The ‘Natti’ performance by 600 local artists on first day of the summer festival was indeed attractive. As hundreds crowded on all sides of the Ridge at Shimla to get a sight of the opening event. ‘International summer festival’ started today with new colours and themes. Alas all on the Ridge because it is only central place in the city. The event once again has provided opportunity for ‘Shimla playground’ activists to raise voice. Repeatedly voices of concern have been heard/read on social media, about allowing permission for kids to play on the Ridge in mornings and Sundays for restricted hours. The voice holds significance because there is a dearth of play fields in the main part of the city. Infact kids living in core areas have no option available and therefore they are tempted to play on the ridge sometime. However, taking alibi of hurting someone during the game, the same is not allowed by the administration. Even if children attempt to play, their equipment is snatched by the law keepers.

‘The Ridge is sinking zone’ ‘Underground tanks have developed cracks’ ‘ There is specified driving zone for emergency vehicles here (Cause of not adding load onto the man-made structure), yet all this on paper. As the public representative continue exploiting the potential of the place. Summer festival every year, continued opening ceremonies, fairs and fests, public address by the Prime minister, Oath ceremonies of multiple governments, its all happening here. Besides that during a prime season, thousands of tourists are strolling here all the time.

“Moreover if the entire paraphernalia is so ignorant of the threat (if any), then depriving Shimla kids from the pleasure of a game or two here is beyond apprehension,” stated Shimla citizen and Nation award winning film maker Vivek Mohan. He said that considering the fact that the government and authorities have failed to provide the kids with ample playgrounds in the city.”Therefore it is the duty of authority to speculate a plan/policy whereby kids can use the Ridge as well as private school playgrounds of the city on a public holiday,” summoned the activist film maker.