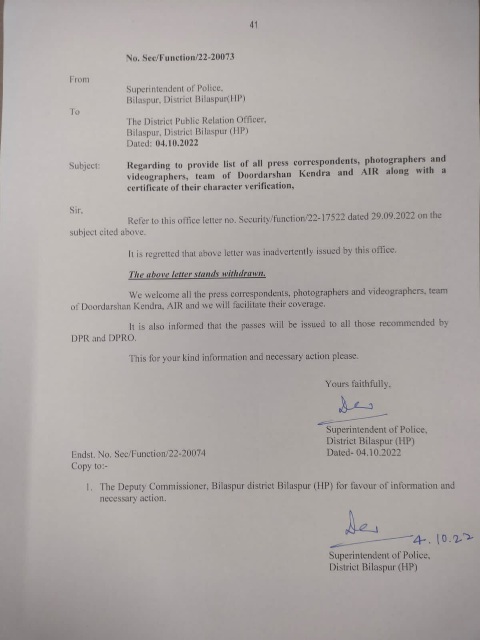 Shimla, October 4
The security agencies and state police’s extraordinary vigil over media may spoil the Modi rally in Kullu and public dedication of Bilaspur AIIMS scheduled tomorrow.
The State Director general of police Sanjay Kundu regretted inconvenience due to a communication made to media personal by the state police and security agencies to produce character certificate before securing passes for PM rally. Sanjay Kundu himself reacted over the issue on the police social media group stating that there was some miscommunication by the district public relation office Bilaspur regarding coverage of the rally at Bilaspur the same is now rectified and all media friends will be facilitated by the DIPR authorities and police. He also said that All journalists are most welcome to cover Prime Minister’s visit to Himachal Pradesh tomorrow 5th October , 2022. Himachal Pradesh Police will facilitate their coverage . Any inconvenience is regretted.
Even the BJP spokesperson has issued a clarity in the matter. Some of the news portal displayed concern over unexpected move by the state officials to produce character certificate for the purpose.
Also opposition Congress has taken a jibe in the matter by doing a tweet through Alka Lamba Congress spokesperson. So far security agencies issued passes to media person two days advance on recommendation of state DPR. There is uncertinity over the issue as media person are contacted eleventh hour and confusion further prevail as some of media person who are coming from outside Himachal Pradesh were asked to produce character certificate.
It show highly unprofessional attitude of concerned security and DPR official as so far media person are secrutinised for their credentials by the state CID SPs on the recommendation of state public relations department.
The increasing number of media houses and web portals also pose major challenge before the PR authorities while shortlisting journalists for coverage.
There is choatic situation over the level of miscommunication since this morning over the arrangement of rallies after BJP face major set back in Mandi BJP Youth wing rally which got washed away by the rain.
Meanwhile media person are being calling each other over the dictat passed to some of journalist to produce character before availing entry pass for the coverage.
It is worthwhile to mention here that verification of media personal whom passes to be allotted is a Internal matter, it exposes the role of security agencies to make the credential checking process as a public issue.

No domestic water bill for rural consumers from this month