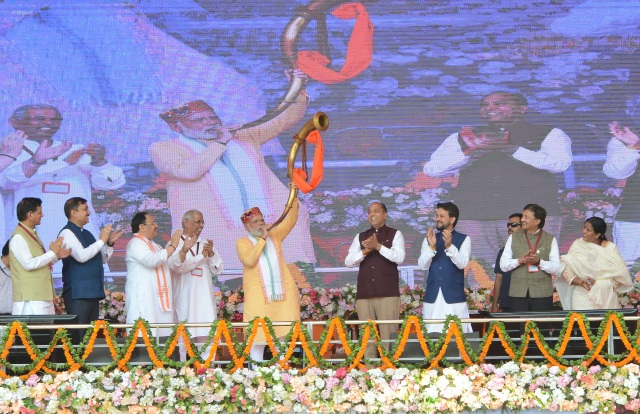 Shimla, Oct 5
Prime Minister Narendra Modi amidst his ‘Mission Himachal’ participated in International Kullu Dussehra festival at Dhalpur ground in Himachal Pradesh on Wednesday.
Earlier on Wednesday morning, Modi inaugurated AIIMS and Hydro Engineering College in Bilaspur.  Modi also played the Ransingha (the traditional instrument of Himachal) in the public meeting of Bilaspur.
After the public meeting of Bilaspur, PM Modi reached Kullu before the start of Rath Yatra of Lord Raghunath in a chopper.
Modi has become the first Prime Minister of the country to participate in the Kullu Dussehra festival.  The seven-day long International Kullu Dussehra began with the Rath Yatra of Lord Raghunath.
Afterwards the PM’s convoy reached Dhalpur ground by road. In view of their movement, the highway was closed for other vehicles. Before the arrival of the Prime Minister, people were given entry in the Dhalpur ground only after thorough investigation. Elaborate security arrangements have been made in view of PM’s visit.
Prime Minister said in a public meeting held in Bilaspur that he is getting the privilege of attending Kullu Dussehra after many years. During this, he will also ask Lord Raghunath to.l bless the country The place where the stage has been decorated for PM Modi is about 10 meters away from the Rath Maidan, while the Rath Maidan is covered by hoardings from all sides for security. Separate gates have been made for the deities and people of Dev Samaj coming to the Dusshera ground, from where the entry is being given after investigation. The deities passed through the protective shield.  Earlier, Lal Krishna Advani had reached the Dussehra festival being the Home Minister.