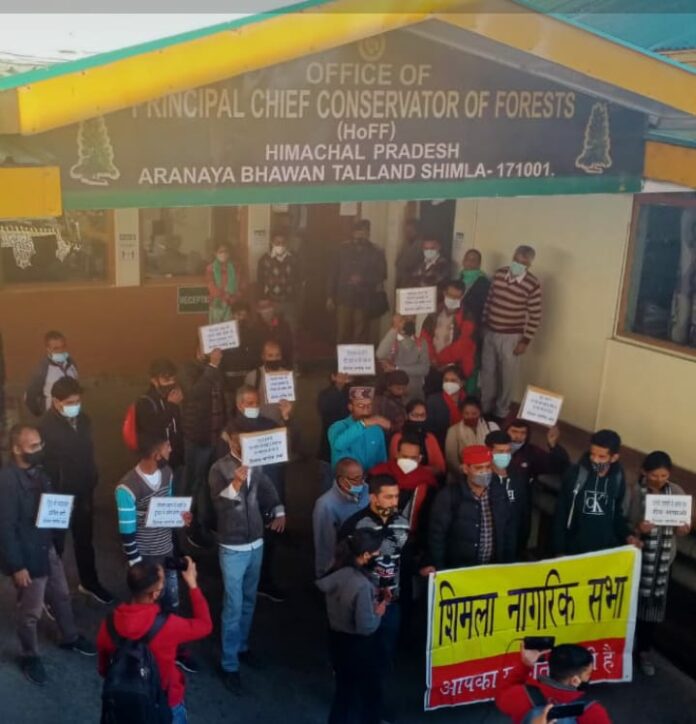 Shimla Nagarik Sabha today staged a protest against the rising incidents of attack by leopard(s) in the urban areas of the state mostly on small Children. Whereas the state wildlife authorities said that it would provide suitable compensation to the affected family and declare the child predator man-eater.
The SNS had given a call of ‘gherav of the State Wildlife and  Chief Conservator of Forest  Office
here today after the recent incident of killing of a five-year-old child from Downdale area of Shimla
by a leopard in Shimla town on Nov 4.
Vijendra Mehra, Kapil Sharma, Satyawan Pundir, Anil Thakur, Suresh Pundir, Chandrakant Verma,
Ramakant Mishra, Balak Ram, Kishori Dhatwalia, Dalip Singh, Himi Devi, Shanti Devi, Nitish Rajta,
Utkarsh, Poorna Chand etc. were present in the performance. A delegation of the gathering met the Chief Conservator and DFO Wildlife and submitted a memorandum. The meeting lasted for about an hour.
All the top officers of the Forest Department were present in the meeting, the Nagrik Sabha informed. The SNS has demanded that the leopard be declared a man-eater.
Adding that, proper arrangement of fencing, cameras and street lights should be made in the areas adjacent to the forest of the city. Financial assistance of at least ten lakh rupees should be
given to the families of the victims of Downdale and Kanlog accidents, have demanded the Sabha.
SNS convenor  Vijendra Mehra and Secretary Kapil Sharma have expressed surprise over such accidents in the heart of Shimla city and termed it as complete failure of the State Government, Municipal Corporation Shimla and Forest Department.
He said that no citizen is safe in Shimla Municipal Corporation and its surrounding areas, as the Leopard is attacking people in the heart of the town
The most surprising thing is that leopards are roaming freely in the residential areas of the city like Down Dale, Nabha, Fagli and Kanlog and the forest department is not doing anything except issuing senseless statements, asserted Mehra.
Adding he said that the department should ensure that the leopard(s) attacking the kids are still not prowling in the vicinity of the town to hit other children and people, ensuring to control and identify its location.
Wildlife authorities said that they have put traps to cage the man eater leopard, but so far it is evading the traps. SNS sabha said that it is very rare that Leopard attack the kids when the town was bustling with the crackers and lights on Diwali night. The matter should have been throughly probed, they added.
The official of the forest department informed SNS that a Leopard which was moving in the territory of
less than ten kilometers for the last three months and attracting the kids would be declared maneater following the wildlife guidelines. The Officials also said that all bushes which become suitable hide out for the leopards would be cleared in a time bound manner. Efforts would be done to clear all the landfill sites and empty dampers as the Leopards are attracted into the town to prey on the stray dogs and  monkeys around such landfill sites.
The forest authorities informed SNS that Special coordination would be done in the peripheral areas to install street lights and fencing to stop the entry of wild animals into human habitations. Beside wards environment committees would be also constituted to ensure the proper collection of garbage and illegal dumping in the open places.
The forest officials also ensured to provide Rs four lakh to the affected family as per forest manual.