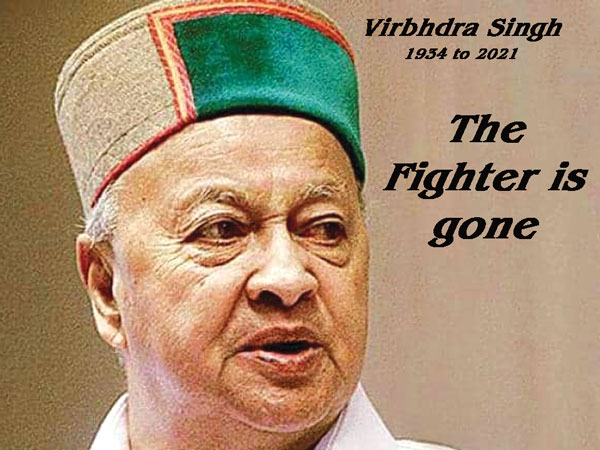 The “Raja” of the erstwhile princely state of Rampur Bushair always remained in the saddle, till he lived. Late ‘Virbhdra Singh the tallest Congress leader who successfully fought numerous political battles during his long career spanning over six decades, lost the battle of life on July 8 this year. He pursued politics on his own terms and always remained at loggerheads with party high command. With a formidable mass base, he had capacity to win the elections for party almost single handed. Number of times attempts of the Congress high command to sideline him failed, forcing it to reluctantly give in to his demand of handing over the state party reins to him. Virbhadra was a force to reckon with and the Congress could’nt seem to have done without him.

A political heavyweight and six-times Chief Minister, Virbhadra Singh had proved every time that he can be down, but never out. He fought his political rivals within and outside the Congress purely on the strength of the tremendous sway he held over masses. In a democratic set-up, people are the decisive force and the wide support he enjoyed, enabled him to successfully pursue politics with or without the support of the party high command.

Remember 2012 polls in the State. When ‘The Raja’ adopted a “rebellious” posture on the eve of the Assembly elections, the high command, which had been systematically ignoring him for the past four years, was forced to take notice and make him the state party chief. Apparently, the party then could not have afforded to take any chances after the drubbing it had received in neighbouring Punjab and its unimpressive performance in Uttarakhand.

The tiny state of Rampur Bushair became extinct long ago, but he carved out a bigger political territory by establishing himself as a popular leader. His royal descent and elite education never came in the way of winning the support of the people. His long political innings had taken him to almost every village. He had trekked through difficult terrain over and over again since he made his electoral debut from the Mandi Lok Sabha seat in 1962.

He remained Chief Minister, more than any other leader of the state. He was often criticised for being “bountiful” to his loyalists and “unforgiving” to those who refused to toe his line. His fiercely combative attitude in confronting rivals and the ability to fight on several fronts simultaneously enabled him to win many political battles.

Even when age took toll on his physical being, his fighting spirit remained intact. He was at his aggressive best during adversity and somehow managed to pave his way, always.

An old instance; he was marginalised ever since the Congress lost power in the state in 2007. He was carted out of the state politics in 2009 and made a minister at the Centre. His wife Pratibha Singh was denied party ticket from the Rohru seat. He received another setback when the election of his son Vikramaditya as president of the state Youth Congress was set aside and he was debarred from contesting. Also, while his detractors were calling the shots in the party, Virbhadra was being targeted by the Dhumal government.

But, he hit back with all his strength and bounced back yet again to occupy the centre stage. Another from 1990; when the party lost power, he was even left out of the nine-member Congress Legislative Party. However, he fought his way to become the Chief Minister even though his rival Sukh Ram enjoyed the backing of the high command and the numbers also seemed to be on his side.

A similar story was repeated during the 2003 Assembly elections when he outsmarted the then state Congress chief Vidya Stokes, a strong contender who enjoyed the blessings of the high command, and steered his way to the throne.

He never bowed out of the arena and every time the bout seemed to be going against him, he suddenly delivered the knockout punch. Infact, at times, vendetta was considered discernible in his approach and political battles got reduced to settling personal scores.

There is a long list of leaders like the late Thakur Ram Lal, Pandit Sukh Ram, Anand Sharma, Vidya Stokes and Vijay Singh Mankotia who had faced his wrath. He had ruffled far too many feathers and it was hardly surprising that he was targeted by his own party leaders.

He was obstinate, unyielding and went all out to decimate his rivals politically. He allowed political space to adversaries, which is rare, but only if it fitted in his larger game plan.

Unlike leaders like Shanta Kumar and Vidya Stokes who did not react much to media reports, Virbhadra was hypersensitive to criticism and reacted sharply and spontaneously. He closely followed media reports and did not allow a single sentence or even a word, which did not confirm to his point of view, go unchallenged. He not only took notice of the contents but also the language, syntax and writing style and, more often than not, he could identify the writer even if there was no byline in the article.

Particular about the use of words, he preferred to draft important press statements himself. This is another important area where he scored over his rivals.

Years of toil helped him establish a rapport with the people. The qualities of compassion and aggression, which he inherited as a “Raja”, helped bolster his eventful career. He was benevolent while dealing with the poor, but unsparing, even ruthless, while taking on his political rivals and detractors.

Such a charisma that even got him a royal departure from mother earth while turning into ashes. Friends, foes, commoners & influential, all came together in praises and respect to bid adieu to the ‘old man of the hills’.

‘When a great man dies, for years the light he leaves behind him, lies on the paths of men’ – Henry Wadsworth Longfellow.

A tribute from Team HimachalScape