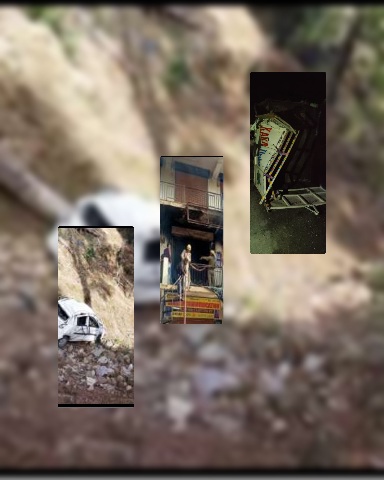 Shimla, Feb 19
Three people died and five have been injured in separate road mishaps occurred in Chamba and Shimla district on Saturday informed the state Administration.
Spokesperson of State Emergency Operation Centre Sudesh Mokta said that two persons died in a road accident occurred near Hanuman Mandir at Sunku- di -Tapri in Bharmour Subdivision of Chamba district of Himachal Pradesh this morning when a vehicle carrying the person fell down about 100 mtrs down the road.
A pickup on the way to Lahaul from Bharmour fell down in a deep gorge killing two occupant on the spot.  The mishap occurred due to rash and negligent driving. The deceased were identified as Driver- Anil kumar (34)and Anish kumar (32) of  Malkotha village of Chamba district.
Body of the deceased handed over to relative of victims after postmortem at Civil Hospital Bharmour today. District Administration Chamba handed over immediate relief of Rs. 10,000 to the next of deceased.
Mokta further said that an Alto car roll down at Kufri near Baghi  under Theog Subdivision in Shimla district this afternoon. One person died on spot and another is injured who was hospitalised at Primary Health Center Kalbog.
Deceased identified as Khan Chand S/o Bhag Chand R/o Naalaban P.O. Kadiwan Sub-tehsil Tikker.
Third road mishap occurred at Masroond in Chamba Tehsil when An alto Car fell down in to a rivulet this evening. Four suffered minor injuries in the mishap who were taken to the Chamba Medical College for the treatment.