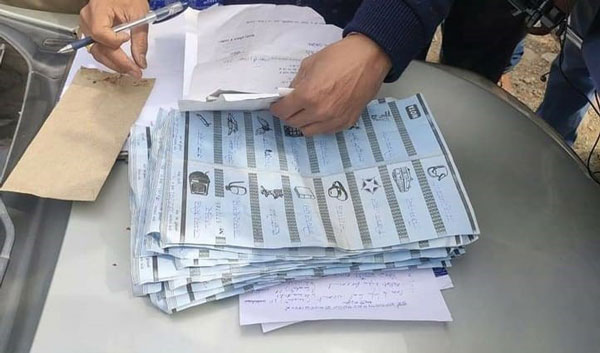 Solan, Feb 13
As many as 25 ballots duly polled in favour of a Zila Parishad ward candidate and the envelope with seal were found in garbage close to Govt Senior Secondary School in Dharampur of District Solan. The ballot papers were of Daarwaa Zila Parishad ward of Solan district.
The recovery of 25 stamped ballots and a sealed envelope in garbage, has raised the question mark on the fair election of the Zila Parishad Chairman Ramesh Thakur, who was  won from this ZP ward. This matter has generated heat in official and political circles.

Officials of the local police and administration have reached the spot immediately after the matter was reported to the authorities. They have started probe into the incident after taking the stamped ballot papers in their possession. Surprisingly, the stamped ballot papers found in the garbage is perhaps the incidence of it’s kind and  it indicates of clause attitude on the part of officials as to what has really happened.
The state election administration has to prove the reality so as to thwart the fear of any rigging or bungling in the conduct of fair elections. The circle close to Zila Parishad Chairman Ramesh Thakur rebutted the charges of rigging or bungling in his election as ZP ward member. His aide says the wide winning margin shows the fairness of the election.
According to informed sources, there are 25 bundles of ballots with stamps on a candidate  Raj Kumar, who lost from Daarwaa ward (Ward No.10) of Zila Parishad, Solan.
State spokesperson of Congress Ramesh Chauhan and others reached the spot. Chauhan stated that 25 stamped ballots and a sealed envelope have been found in garbage.  Ramesh Chauhan has registered a complaint in this regard with the State Election Commission and talked to District Magistrate of Solan, KC Chaman. According to district officials, the administration has began an intensive probe and investigation on this matter.