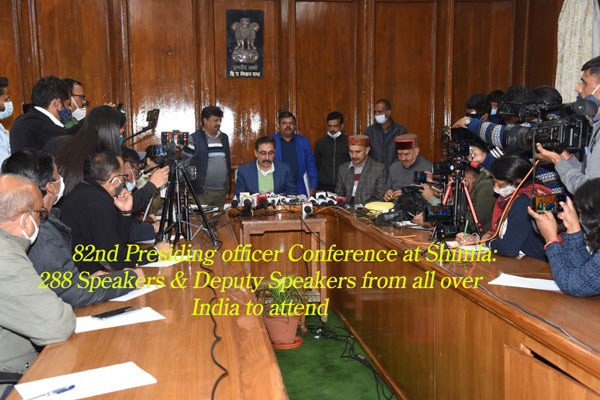 Shimla, Nov 10
Four days 82th Presiding Officers’ conference would be held at Shimla Vidhan Sabha Complex in the Council chamber from Nov 16 to 19. Representatives from all over the Country as many as 288 delegates including Speakers, Deputy  Speakers of Lok Sabha, Rajya Sabha, State Legislative assemblies and State Legislative Council along with their spouses, would participate in it.
This was stated by the Himachal Pradesh Vidhan Sabha Speaker Vipin Singh Parmar
while addressing a press conference here today. Parmar said that Lok Sabha Speaker,
Om Prakash Birla , Vice Chairman of Rajya Sabha Harivansh Narayan Singh Governor of
Himachal Pradesh  Rajendra Vishwanath Arlekar  and Chief Minister Jai Ram Thakur
leader of Opposition Mukesh Agnihotri would be prominent among those present on
this occasion.
Prime minister of India Narendra Modi would also address this presiding officer conference
on Nov 17 at 1028 hrs virtually.  Speaker said that this conference would also coincide
with the 58th Conference of the Secretaries of Legislative Assembly or Councils of
principal parliamentary  secretaries and Vidhan Sabha Secretaries would also attend
the conference along with presiding officer.
Apart from this, the Presiding Officers (Speaker), Deputy Presiding Officers (Deputy Speaker and Principal Secretary or Secretary of 36 State Legislative Councils and Legislative Assemblies would also participate in this conference. Altogether from each State four delegates would participate with their spouses, totaling to 288.
Apart from this as many as 378 General Secretaries of Lok Sabha and Rajya Sabha, representatives of Parliament TV ( including 20 media representatives) and 90 other people would attend the conference.
With the joint efforts of the Sabha Secretariat and the Lok Sabha Secretariat, preparations are in full swing for its successful event. Complete arrangements for lodging and transportation have been made for all the guests. All the guests have been staying at high-end hotels in Shimla.
Beside this former Speaker of Himachal Pradesh Vidhan Sabha and Deputy Speakers, all Member of Assembly and Parliament from the state including Union Minister Anurag Thakur was also invited in the conference on Nov 17.
Lok Sabha Speaker Om Birla will reach Shimla on 16th November and he will stay at Rajbhavan.
History of Council Chamber
Shimla Council of Chamber has hosted a historic occasion of Indian Parliamentary democracy. This is 100 years ago when first conference was held here, on September 14 and Sep 16, 1921  while India was under British rule.
This legislative assembly, which was the Central assembly till independence and Himachal Pradesh and Punjab Assembly after 1947 has hosted Presiding officer conferences in 1921, 1926, 1933, 1945, 1976 and 1997.
At the dawn of Indian Parliamentary democracy in 1921, this council of chamber of Vidhan Sabha had hosted the first central assembly session in which Frederick white first Speaker and presiding officer was nominated by the British rulers.
The first speaker of Indian origin Vithalbhai Patel who defeated Frederick white by the margin of two votes, happened in the central assembly, speaker added.