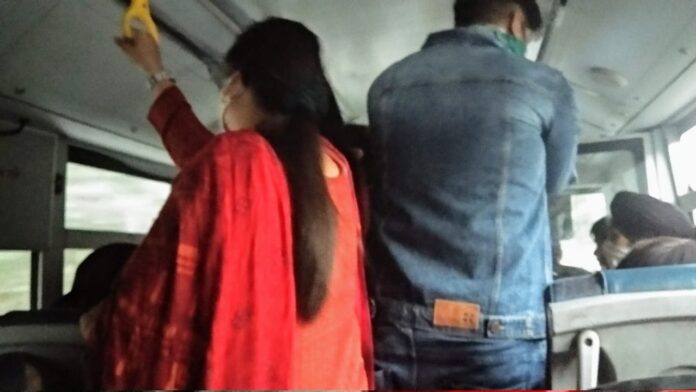 Initially the government allowed transport to resume with 60% occupancy but with more relaxations, the occupancy was restored back to 100%.  In the present situation buses have started to tread the same old path where more and more people are being seen flocked inside the buses.

“There was time when to compensate the loss of transporters government took decision of fare hike from Rs 5 to Rs. 7 and that time only 50% people were allowed. Now once again buses have more passengers than its sitting capacity but still fares are the same”, rued Vijay Kumar Verma, a resident of New Shimla.

Narrating his personal experience, he shared “Yesterday I boarded a HRTC bus from my house in New Shimla to BCS. At BCS it was difficult to move out as at least 20 passengers were standing in a matter of 3 kms.”

All the SOPs seem to have been ignored and the concerned authorities in the state seems to be least concerned about the safety of the masses.

When Transport Minister, Bikram Singh was confronted on the issue he denied the entire fact. He said that each evening he gets report and hardly 60 to 70 percent occupancy is seen. When the matter was pressed and Minister was asked to personally experience a ride in bus, he mellowed it down saying he will order all RTOs to keep check if such is the situation.

It is sad that Ministers sitting in their luxurious offices and travelling via a chauffeur driven cars are not aware about the problems that people are facing at the grass root level. During the peak hours, passengers are standing in buses especially on routes where the bus service is lesser but the commuters are more.

If once again things are back on the same old line then the government should reconsider their decision of fare hike as the very idea to compensate the bus operators’ loss due to less occupancy has lost its meaning, state other citizens. For a daily wager Rs 2, makes a big difference which even the government realizes as they claimed to have taken the decision with a ‘heavy heart’. Perhaps time is ripe to ease their burden.