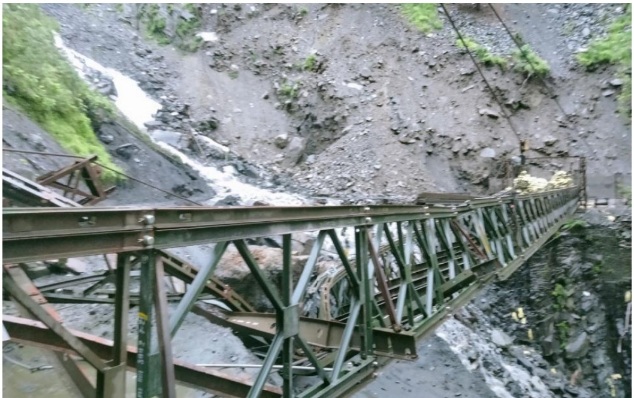 Shimla, August 8
One died, and two others were injured in a cloudburst which occurred in three places of Salooni Tehsil in Chamba district on Monday morning. Three bridges and water flour mills were damaged, and about half a dozen houses and ten vehicles were also damaged. The cloud burst occurred in Bhadoga, Kihar, Gulel Pargana, Sjhyani Oargana, Banjala Muhal Kilod, Sarog, and Thalan Nallah village Gram Panchayat Dhand & Kihyar around 11 am on Monday.
State disaster management authority confirmed that a 15 yrs old boy died, and 02 persons got minor injuries in Bhadoga village in the incidence. The deceased has been identified as  Vijay Kumar (15) s/o Ramesh Kumar.
In addition to the loss of life, three gharats (water flour mills) and three bridges, ten Vehicles were damaged, including two- Cars, two Pick-ups and six motorbikes were washed away or damaged.
An incident of cloud burst was also reported at Gulel village of Gram Panchayat Kandhwara Muhal kandhwara Tehsil Salooni District Chamba. Due to this incident, agricultural land got washed away. Overflow of water forced six houses to be vacated, and people were shifted to safer places. One public works bridge was also damaged at Shalei Kandhwara Nallah.