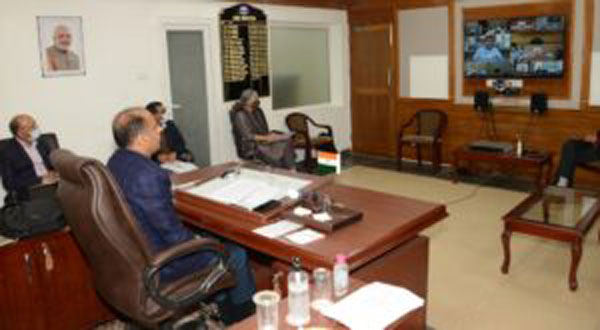 In a video conference Chief Minister Jai Ram Thakur urged the Union Minister for Road Transport and Highways Nitin Gadkari for according time bound sanction of Rs. 536 crore for 27 projects, which includes 17 roads and 10 bridges project under the Central Road Infrastructure Fund for the State, keeping in view the geo-graphical conditions of the State.
Thakur said that keeping in view the density of vehicular traffic on Shimla-Matour and Pathankot-Mandi National Highways, it was essential that periodic renewal and maintenance of these roads be ensured. He said that 97 kms Sainj-Aut National Highway-305 including Jalori tunnel must be included under the World Bank Green National Highways Project.
Chief Minister thanked the Union Minister for sanctioning of 1486 crore Paonta Sahib-Gumma-Fadus Pul road and Rs. 1112 crore for Hamirpur-Mandi roads under World Bank Green National Highways Projects. He also thanked Union Government for handing over 205 kms. Samdho-Kaza-Gramphu National Highway-505 to State Government for development and maintenance. He said that this would give boost to development of tribal areas besides promoting tourism activities in these areas.
Thakur urged the Union Minister for early clearance of 69 highways of the State so that work could be started at the earliest.

Chief Minister said that due to the COVID-19 pandemic and lockdown thereafter work has been restarted on 11 projects on National Highways by following the guidelines of social distancing and disinfection of the Government of India. He said that National Highways Authority of India has also restarted seven projects in the State whereas about 200 workers were engaged.
Thakur also stressed the need to strengthen the office of National Highways Authority of India in the State to expedite the work on various projects being executed by NHAI in the State. He also urged the Union Minister to rationalize toll barrier at Manali as this was causing great inconvenience to the commuters.
Union Minister for Road Transport and Highways Nitin Gadkari assured the Chief Minister for sympathetic consideration of various demands of the State.