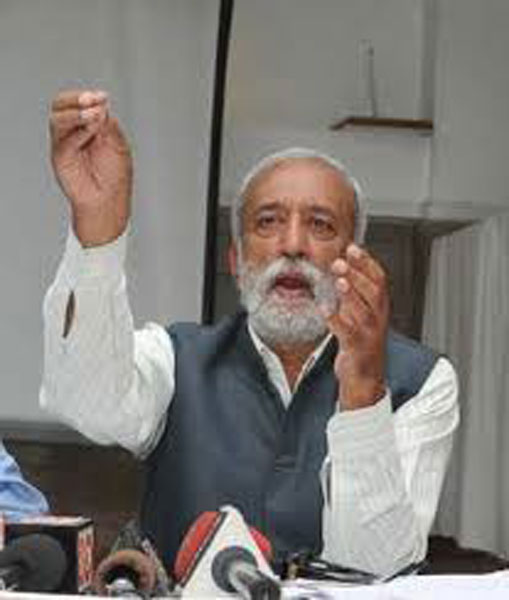 CPI(M) legislator Rakesh Singha sought to shift the IGMC OPD to some other place in wake of increasing footfall or risk of Covid patients in the state premier hospital.
In a open letter shoot to Chief Minister Jai Ram Thakur Singha said that later’s visit to Indus hospital on Saturday was expected much earlier as similar suggestions were given to him by the party last year in month of March.
If Indus Hospital would be converted to Covid centre without providing uninterrupted supply of Oxygen it would create another problem during the 2nd wave of pandemic, he said. Adding that it would not be possible at this juncture to shift the Covid patients from IGMC to new Covid centres like Indus. If one would have to shift patients without oxygen supply or breather mask it would lead to more causality, he warned.
Seeking to shift OPD of IGMC to some other places Singha said that there are many who are suggesting to take over vacant buildings for creation of Covid Hospitals, probably do not understand the basis science of the Virus and therefore they assume any building could be converted into hospital. He said that govt should not fall a victim of such immature ideas.
He warned that during the 2nd wave of the pandemic the toll of life is going to be bigger. Singha suggested that only way to overcome the situation is when ideally majority people develop resistance to the virus. Your are aware the resistance by the body is built when it develops antibodies against the virus either by vaccination or by the infection.
The strategy to fight the virus is not getting desired results. He said that this is evident from the percentage of death rate which is 2.13 per cent . One of the highest in the country. The all India average is 1.17 pc , the state of Kerala has a low death rate of 0.28 per cent  in-spite of gathering having taken place in the recently concluded election.

“Deaths could be minimized by preventing the repeated referral”
Singha said that 50 per cent death are of those patients who are referred,  and the major reason for the same is a gap of uninterrupted supply of Oxygen to the patients i.e supply of sufficient quantity 30 litre per minute. These death could be minimized by preventing the repeated referral of the patient from one dedicated Covid19 hospital to another, he asserted.
He said that creation of several covid centres at the stage would prove counter productive. If at all they were to be made then they should have been made long before.

Talking about his constituency said that this is no time to designate Theog Civil Hospital as a Covid centre. The strategy must be that a Covid19 infected patient anywhere in Theog should be referred to DDU or IGMC. Any patient sent to Theog would subsequently will have to be refereed to DDU because there is no possibility in Civil Hospital Theog  to guarantee required litres of uninterrupted supply of oxygen.
He said that it would be good to reverse the process i.e patient after treatment at DDU or IGMC to step down to Covid centres after gap of 10 to 12 days on recovery stage. This would help in vacating the beds which could be available for more serious patients.
Singha said that shifting OPD from IGMC would allow focus on only super specialty departments and on increasing the bed capacity for covid patients. He said that correct analysis of the spread of virus indicates that situation is becoming precarious in the day ahead and there are possibilities that situation could get out of control. He said that current wave is spreading five time faster than the virus spread in the first wave.

Singha also suggested to recruit a minimum additional three thousands para medical staff in the first phase. he also advised to call on volunteers who would assists the patients.

HP #COVID-19 update- With yet another today, 7 test positive @Kangra...