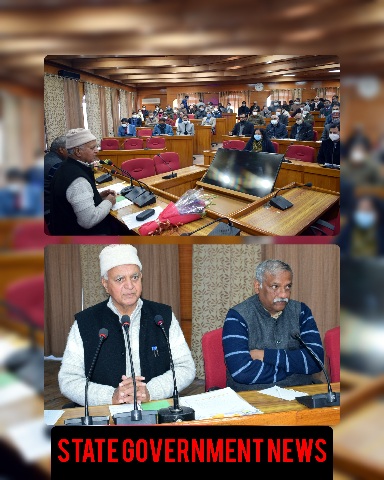 State Government said today that it is committed to redress grievances of outsourced employees and directed all departments to ensure in time release of salaries, epf and esic dues to them.

This was stated by the Jal Shakti Minister Mahinder Singh who was presiding a meeting of cabinet sub-Committee constituted for redressal of issues related to employees hired on outsource basis .

Thakur said that youth in thousands are rendering services on the outsource basis in various departments, boards and corporations and cabinet Sub-Committee was formed to cater the interests and end any kinds of exploitation against them

Committee would obtain suggestions from the departments to prepare a report before the upcoming Budget Session to redress their  grievances. During the meeting all the heads of departments were directed to ensure that all the pending payments were made in time, alongwith provisions of EPF card to outsourced  worker.

The HODs would organize special awareness camps for employees about their PF accounts and other facilities being provided to them. Departments have to develop a mechanism for monitoring the details related to time bound payment of GST, EPF, ESIC by the outsource agencies. Power Minister Sukh Ram Chaudhary  who is also a member of the Sub-Committee also gave suggestions in the meeting