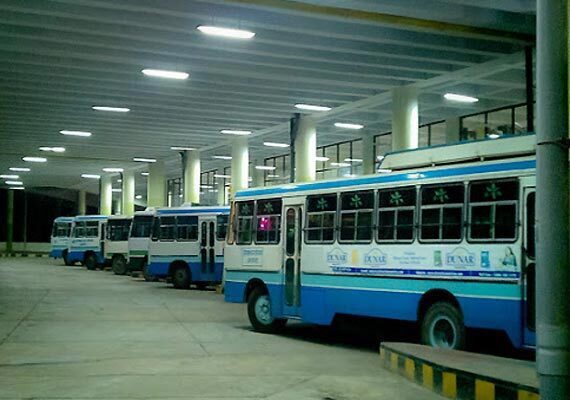 Shimla, Aug 4
Due to negligible bus fleet deployed by Himachal Pradesh Road transport Corporation on Rural routes woman folks had to face hard time despite Jai Ram Thakur Government offering of free travel to them on occasion of Rakhi.
The state Government seemed to be apathetic towards to the daily worries of common man as HRTC fleet remained off the road on Monday forcing the commuters to wait for long route bus services for many hours.
Woman who had to travel for five to six kilometers on Rakasha Bandhan were not able to avail the benefit of free travel benefit since most route remained off in the Rural
Shimla and Kasumpti assembly segments.
“We had to wait for three hours at Halti, suburbs of Shimla town as there was no local bus services on the road told Reena Thakur. Woman who were out of their house to bind Rakhis were forced  to board the crowded Shimla-Seri-Nalagarh Bus to travel five to six kilometer.
Another Pooja who is a daily commuter between Shimla and Airport Jubbherati lamented that Since Saturday there are only few HRTC services on this route, and mostly long route. ” I had to hire shared taxis as HRTC daily bus services are not plying regularly and on the routine routes. ” she added.
HRTC employees who are posted at Taradevi said that they had to drive their own vehicle to arrive on duty since HRTC bus services were withdrawn from the Shimla-Chanog route.
There is no logic to not run the services to any route when a fare hike of 25 percent has been made moreover private bus operators are being allowed to board their services beyond the capacity, in absence of HRTC regular services. High headed HRTC Management when contacted to respond over the frequent drop down of routine services tried to shift the burden on the lack of coordination between different HRTC depots.
Local Resident  of Jubbarhati Raj Kumar advised that HRTC have fleet of about 50 electric bus services which could be deployed on the suburbs or rural road around the capital town. He alleged that HRTC suffered massive loss recently as a number of vehicles which could not ply during the lockdown lost batteries while remaining parked for a long time.

Special train from Goa to Una to get Himachalis