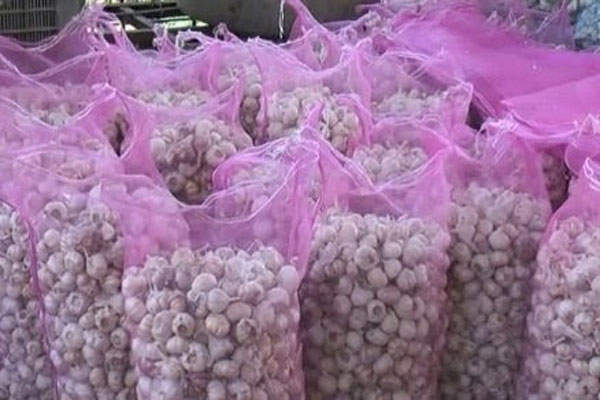 Shimla, May 12
Renowned as ‘White Gold’ the fragrant Garlic of Senadhar and Giripar area of Sirmaur district floods the North Indian Fruit and Vegetable markets with bumper production this year. District Market Committee President Rameshwar Sharma said that the Deputy Commissioner Sirmaur has been requested to grant exemption to commission agents and buyers from Corona Curfew with start of Garlic season in the district. Currently there are reports that the Commission agents are informing farmers to not hurry the crop to mandi as are open only for three hours and hurrying the same may glut the market.
Sharma said that the market should get special exemption so that farmers could trade the Garlic which has heavy demand from the South Indian States. The market has good demand of the species as it can be stored without Air Condition round the year. Farmers have already dispatched their consignment to the markets of other district and states from Sirmaur and the crop is reported bumper despite less rainfall in the winter sowing season.
Most of farmers take as many as three to four hours to arrive in the markets however till that time markets are closed. Commission agents at Dadahu are demanding to allow markets open for a few more hours so that they can sell out their produce without hurrying and fetch a good price by thorough auctions in the open markets. President of Dadhu Vegetable Market Kamal Raj Verma and farmers Rajesh Thakur, Vikram Singh, Jagat Ram and Arvind Kumar  demanded or were in favour of keeping the vegetable or wholesale markets open for sufficient hours.
Current pricing trend of ‘White gold’
The initial trends of the markets indicates that farmers likely to be fetch attractive prices of their produce. In Senadhar and Giripurdhar the wholesaler and buyers are offering good prices to farmers. It is worthwhile to mention here that Senadhar and Giripar area of Sirmaur alone produce around 50,000 to 60,000 quintal of Gralic which likely to be higher side this season.
The garlic was currently being dispatched to Shimla, Solan and other neighboring state markets from Sirmaur district. Since previous fortnight the whole sale price of Garlic is 40 to 55 per kg and it is reported to be comparatively better of last year when it was Rs 25 to 50 per kg.
White gold and the area
Garlic is considered highly nutritive and immunity booster as it help in fast cell division beside it is helpful to improve the appetite having a number of medicinal values.
Rajgarh, Pachhat, Renuka, Gripur and Poanta and Bharu Sahib area of Sirmaur district are considered among high yielding places of Garlic in Asia.  Most of produce is exported to South India as the traders or mostly big food chain and restaurants owners buy most of
Sirmaur Garlic.
Agriculture and off seasonal veggies are backbone of hill economy as it contribute around 15 per cent to state gross domestic product(GDP). About 70 per cent population of this hill state thrive on this vocation and render their livelihood.