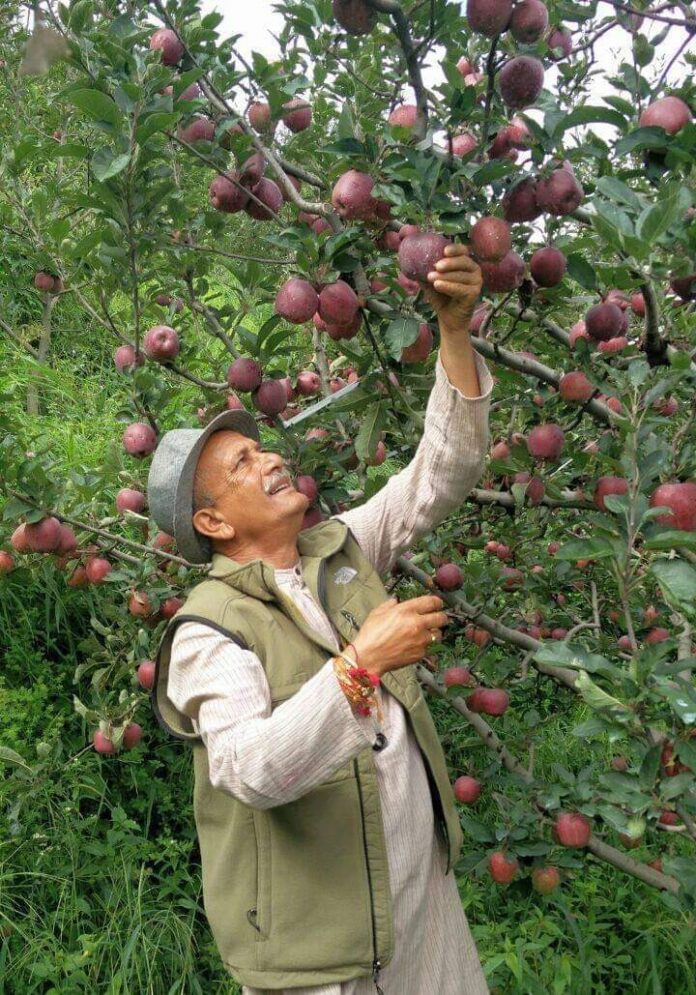 Shimla, Oct 10
A progressive and pioneer apple grower renowned as ‘Himalayan Appleman’ Laxman Thakur Daulta died at Shimla on Saturday after heamrage.
He was 71 yrs and belonged to Rohtan village of Jubbal left behind three sons. He suffered a brain hemorrhage and died at IGMC on October 9. He had also lost his wife and three close relatives within a span of few months.
He left behind three sons- one a Col in army, a scientist at Agricultural University Ludhiana and third one, an entrepreneur in London .
CPI(M) MLA Rakesh Singha condoling untimely death of Lakshman Thakur said that it is a personal loss to him but a bigger loss to the changing approach and practices that the apple economy is undergoing.
” My salute to his contributions to the apple economy and convey my heartfelt condolences to all his family members,friends and relatives. ” Singha said.
Senior Journalist Kuldeep Chauhan said that sudden death of Thakur is a huge loss to the apple farming community at these challenging times ahead.
Laxman Thakur during his lifetime contributed a lot to modernize the apple industry in Himachal pradesh. He brought in  concept of anti hail guns to protect apple trees from the hail storms.
He strived to encourage root stocks farming and advocated an integrated approach of natural and modern apple farming to achieve better and quality yields of fruit since 1980s and 90s.
He advocated coexistence of local ecosystems and apple economy and adopted traditional practices in apple farming not  to disturb nature and maintaining  eco balance to tackle climate change.
He brought innovations from Europe and elsewhere to improve quality of apple fruit but never hesitated in using local eco-friendly gow-mutra and friendly insects to fight out the scourge of scab scale and fungal diseases using these with modern chemicals to achieve better results
He raised issues of insurance cover for hailstorm that ruined apple every year. He advocated use of universal cartons to check over grading and overweight and shun the use of gunny bags to transport apple.
He always said,”let us not be shoot growers but be fruit growers “by adopting latest root stocks varieties and pruning and trading practices in orchards to face modern challenges in world fruit markets let loose by free trade and WTO.
He advocated the cold chain and CAS stores to safeguard apple fruit and minimize the losses to the fruit farmers  in particular and Farmers in general by checking crashing markets during peak season.
Chauhan said that politicians of all hues never utilized his knowledge and practices by giving any recognition to him.
Convenor of Upnagariya Jankalyan Samiti Govind Chitranta said that Thakur visited abroad founded International Himalayan Eco-Horticulture Society to promote new technologies and skills to grow high quality apple and of different cultivars which now brought new revolution.
Former Chief minister Ram Lal Thakur, Virbhadra Singh, former Horticulture Minister Narendra Bragta and Former MLA Rohit Thakur irrespective of party affiliation took assistance of Daulta and also encouraged him to visit abroad for promotion of Apple cultivation.
Laxman Thakur Daulta have great contribution to encourage apple cultivation in Jubbal & Kotkhai area which now is considered highest productivity and production.

Fire breaks out in LPG godown at Kotkhai

Petition for quashing of fIR filed by alleged kingpin of question...

Govt.should mend plans or else another ‘Economic Epidemic’ could be witnessed...