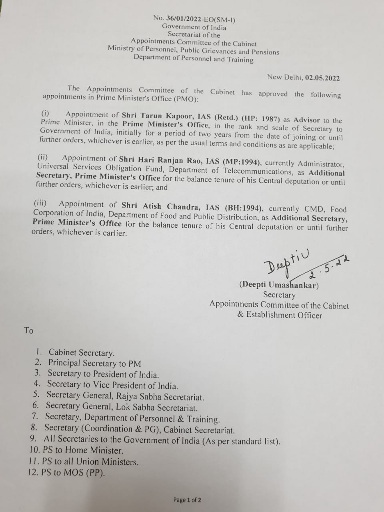 New Delhi, May 2
Himachal Pradesh cadre retired IAS Tarun Kapoor) ( HP: 1987 )was appointed as Advisor to the Prime Minister in the PMO in the rank and scale of Secretary to Government of India, initially for two years from joining or until further orders. A notification released in this effect by the
Appointments Committee of the Cabinet approving the following appointment here today. The order also mentioned postings of two other officers as Adl Secretary in Prime Minister’s Office ( PMO ). Hari Ranjan Rao, IAS (MP: 1994), currently Administrator, Universal Services Obligation Fund, Department of Telecommunications, as Adl Secretary, PMO and Atish Chandra, IAS ( BH  1994 ), currently CMD, Food Corporation of India, Department of Food and Public Distribution, as Adl Secretary, PMO, for the balance tenure of his Central deputation or until further orders. Kapoor and Former Chief Secretary Anil Khachi, who is state election commissioner now, were adjudged best bureaucrats by an Institution last year. They were included among top 50 IAS officers on the basis of their performance on duty.