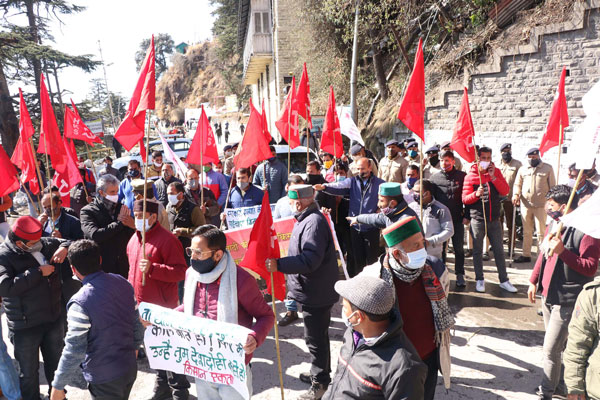 There are reports of similar protest being held in 22 places of state in which thousands of farmers, left unions workers, students, advocates, women, intellectuals and common man from various walks of life took part.
Among other places there are reports of similar protests at Rampur , Nirmand of Kullu district, Balh, Jogindernar and Sarakaghat of Mandi , Balchoki , Kullu and Ani , Palmapur, Dharmshala , Una , Hamirpur, Bilaspur, Solan, Darlaghat, Norhdhar, Pontasabhib, Tapri etc.

The left unions bought the march from the Lakkar-bazar toward cart road in Victory tunnel
around 1230 hrs Saturday joined by HKS leader Dr Kuldeep Singh Tanwar , CPI(M) member of Assembly Rakesh Singha, state secretary Dr Onkar Shad, former Mayor of Shimla Sanjay Chauhan, President of state AIDWA Falma Chauhan and CITU presidents Vajinder
Mehra and other leaders along with hundreds of protesters.
The protesters successfully held the Chakka jam at Victory tunnel for one and half hours however the protesters dispersed from the protest site after one and half hours to avoid inconvenience to general public as the most of state roads are already snowbound and are being running snail pace.
Rakesh Singha who was expected to give Dharna at Theog in his assembly constituency did not attend the protest there as the traffic was snowbound on Hindustan-Tibet Highway for last three days.

What did the leaders say

Addressing the protest meeting Singha said that number of farmers are already facing the burnt of similar market reforms as many of them are being cheated by the commission agents who are buying apple from farmers out of APMC markets without registrations.
Apple growers are being cheated by the such middle man to the tune of crores. If the reforms are implemented in full swing they would allow such markets forces to ruined the state economy said Singha.
Dr Tanwar said that Modi government is unleashing repressive and draconian means to crush the peaceful protest of 32 farmers unions on the borders of Delhi where lakhs of farmers are protesting  for three months in bone biting coldwave and 160 farmers have died during the movement. Tanwar added that Modi Government is working in the interest of big corporate houses and are anti farmer in the their policy making. The Union government has unleashed violent means to check farmers form protest against the three black laws.
Farmers have to face the divisive tactics of Modi governments in the early days of movement as farmers of Punjab and Haryana were put against each others by raising SYL Nehar issues to break their unity, he added.  The Government did not stop here but used batons, lathis, and water cannons on the protesting farmers to disperse them, though it could not succeed . Dr Tanwar said that after Jan 26 protests of farmers in the Union
Capital they had to face the government and BJP supported goons who unleashed terror and indulged in stone pelting.
When farmers remained candid on their demands the government resorted to more inhumane moves like putting barbed wires, huge cements blocks  barricades, spikes and sharps rods on the roads to isolate them at the protesting sites. The move however evoked massive response against the government on the international level.
Pertinent to mention that there is no instance in the history of democratic India when such ruthless action was taken against the farmers who are real son of soils and nationalists. Even false propaganda was being used 24X7 by some government supported news channel and media houses. Repeatedly news anchors and media houses close to establishment are branding the protesters as antisocial elements, terrorists and anti-nationals etc.     ,
The loose cannon were spreading hateredness days and night against the farmers and number of people have been also roped in to defend the government or to counter the popular public sentiments and farmers movement, alleged the farmer leaders.

The agitations lasted peacefully in the state. Himachal Pradesh Kissan Sabha and other
farmers unions are supporting the protest against the farms laws and demanding effective implementation of MSP to benefit the farmers.

Thunderstorm and heavy rainfall lashes many parts of HP