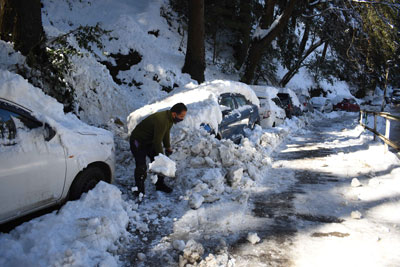 Shimla, Feb 6
There seems to be no let up from the snow vagaries in Himachal Pradesh as people are cut off from road communication forced to shiver in the extreme cold without power and water supply in many areas of the state.
Official confirmation of the report says that despite heavy snowfall two days ago roads, transport water and power supply in many areas of state continue to remain disrupted till this evening. State government officials said that 281 link roads, one state highway and three national highways were closed for vehicular traffic on Saturday evening. A majority of these were in the districts of Lahaul and Spiti (116), Shimla (85) and Kullu (55). A total of 639 power distribution transformers are disrupted in the state, leading to outages in several parts of the state. The Shimla district is the worst affected with 445 transformers down.
In the town of Shimla, traffic jams occurred at several places including Talland, Khalini, Bemloe and Lift on Saturday due to slippery road conditions or vehicles getting stranded due to snow, said the police. The police have advised people to drive carefully and avoid road journeys for sometime unless urgent. Although snow has been cleared off the roads across the town, driving is still dangerous and accident prone due to the formation of an icy layer on the roads called ‘black ice’.
The district authorities have asked people to refrain from driving especially in the morning, when slippery conditions are the maximum.

March to May 2020 Qtr private school fees should be waived-off...