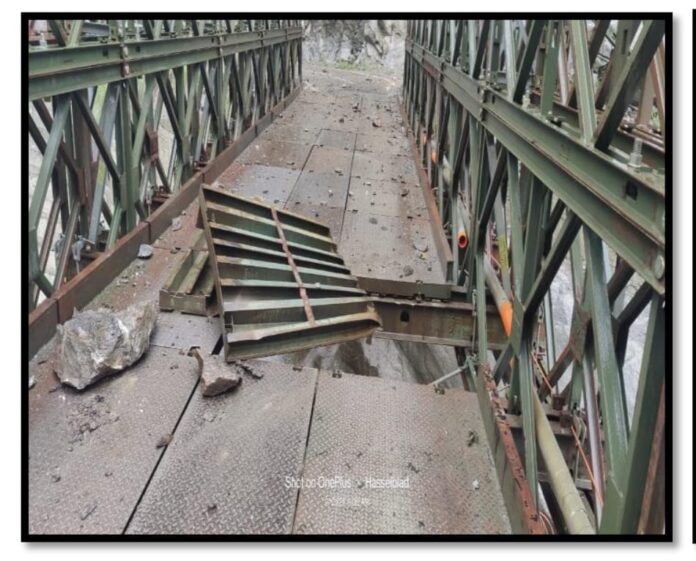 Shimla, Sep 13
Inceasent rainfall continuing since last three days have wreaked havoc as including three National Highways, 25 roads are blocked by landslides and hundreds of power supply schemes are disrupted in the state.
Deputy commissioner Kinnaur Abid Husain Sadik said that  an incident of Shooting Stone occurred at Village Urni in Sub-Tehsil Tapri disrupting vehicular traffic on Hindustan Tibet National Highway-5 as heavy boulder damaged the Urni steel bridge.
He said that no loss of life is reported however all vehicular movement has been stopped till administeration opens the bridge after the repair.
Fifteen roads are closed down due to either landslides or because of being washed off  in Kullu district as nine link road are off in Banjar subdivision, four in Nirmand and two in Manali Meanwhile, Manali-Leh NH-003 is closed due to fresh snowfall at Baralacha pass in Lahaul Spiti district , NH- 305 in Kullu also closed due to heavy rainfall.
District Emergency Operation Centre Kullu informed that an incident of Landslide occurred at Nehru Kund Manali. Due to which road is closed .
Five link road closed in Mandi district and one each in Shimla and Chamba.
Power Supply has also been disrupted due to inclement weather conditions as 156 power supply substations are affected by the rain including 103 in Thalot of Kullu, 25 in Rajgarh of Sirmaur, 24 in Manali and four in  Kullu.
Tourist place Manali recorded 97 mm rainfall till 0830hrs on Monday, Dharmshala 56.8 mm, Palampur 38.6 mm and Kangra 32 mm, Keylong 21 mm, Sundernagar 16 mm and Bhuntar 15 mm and Una 19 mm.

Set up State Transport Appellate tribunal within a month: HC

Amendment in FRBM law for only one year : Minister, Oppn...